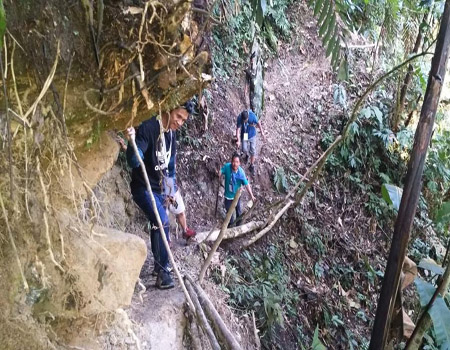 Crossing deep gorges on narrow log bridges, climbing a slippery slope with the help of cane ropes, fording tricky streams and traversing deep jungles without a compass – the road to the Sario-Saria polling station under the Bameng assembly constituency is a commando crash course for civilians going up there for the first time.
“The road is steep, slippery, and sometimes nonexistent,” says 42-year-old school teacher Jorjo Yangfo, who had recently gone to Saria village as a presiding officer. 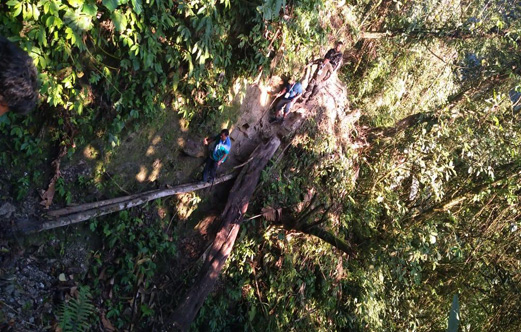 “I almost lost my life after my hands lost grip of the cane rope while climbing a steep slope. Lucky for me that the next thing my hands could latch onto was a sturdy plant deeply rooted to the earth; otherwise I would have crashed into the Kameng river some 500 feet below,” said Yangfo, narrating the terrifying moment with a smile on his face. On the return journey, one has to rappel down the same stretch, he adds.
Jeetendra Kumar Meena, an arts teacher at JNV Seppa, who was a part of the polling team as a micro-observer, recounted his journey with trepidation:
“The track was very scary, and I could barely find space for my feet while negotiating a 90-degree cliff. I would rather quit my job than return to this place.”
For the rest of the track, “Meena walked like a spider – slow and cautious,” says Cheku Yangfo, the first polling officer, with a bout of laughter, adding that one of the porters got badly injured after he lost balance and crashed face-first onto a tree trunk. The polling team comprised five polling officials, six security personnel and 14 porters, besides a micro-observer.

A backward tribe
Situated in the valley of the Walla river, at 4175 feet above sea level, Saria, often reckoned in conjunction with the neighbouring Sario village as ‘Sario-Saria’, remains one of the most difficult and inaccessible villages of the hinterlands of East Kameng district. The picturesque border village, with the snow-capped Himalayas adorning its backdrop, is home to one of the most backward tribes of the state: the Puroiks, whose subsistence largely depends on nature.
For centuries, this minority community has endured suppression and atrocities of domineering neighbours belonging to the Nyishi tribe, who claim lordship over them.
Election is a bad time for the community, for it is the occasion when their bossy neighbours seek proof of their loyalty.
As per the latest electoral roll, the Sario polling station, comprising the four villages of Sario, Saria, Langcho and Dao, recorded 210 electors (113 males and 97 females). The total population of the four villages is 236 persons, as per the 2011 census, out of which Saria accounted for 39 persons, the lowest among the four.
Yangfo’s polling team took the route on the eastern bank of the Kameng river. Bodo, a Nyishi village recently connected by an unpaved PMGSY road, is the last point upto which vehicles can reach during the dry period.
“It took our team 14 hours of continuous foot march to reach the village. We started our journey at 4 am from a village called Lamra, took some rest on the way at a lone house somewhere after Veu village for water and biscuits. Thereafter, we reached Saria at 6 pm. We were rather quick, otherwise it is a two-day marching distance,” says Yangfo.

Liveliness after five years
For the villagers of Saria, elections are the only occasions when government officials visit in hordes, besides the non-resident electors, who mostly stay away from the village to attend to their jobs. The village, which boasts of some six houses, a thatched Catholic church and an old government school, gets back to life momentarily with the influx after five years of wilderness.
The 25-odd permanent dwellers of the village know that this liveliness is ephemeral and won’t last for more than a couple of days.
On reaching Saria, the polling team was pleasantly surprised by the hospitality of the villagers, the cleanliness of the village and its toilets, and the availability of solar-powered lights and drinking water.
“The government-appointed village head welcomed us and showered our team with hospitality. I will cherish it,” the presiding officer says with gratitude in his eyes.

Touching EVMs for the first time
From the accounts of the old electors, the presiding officer, on his team’s arrival at the receiving centre, informed that the villagers were “quite happy to touch, feel the electronic voting machines (EVM) and casting their votes by themselves for the first time.”
In the past, their bossy Nyishi neighbours would come to the booth as polling agents and force them to surrender their right to hit the ballot buttons after the mandatory signing on the voters’ register.
“This time, however, I briefed the Nyishi agents of all the political parties about the rules, and that I would not allow proxy voting, which they agreed to,” said Yangfo, beaming over his success.
The poll ended peacefully, and the teams reached the receiving centre safely, though bruised and exhausted, two days later.
Back in the headquarters, Seppa, until the arrival of all the polling teams, there were some nervous moments with reports pouring in of ambushes laid by miscreants at several locations along the retrieval routes to rob and break the EVMs.
Police escorts had to be hurriedly scrambled for the safety of the EVMs and the polling parties on the move. Some of the EVMs and the presiding officers of Bameng area had to be dramatically airlifted in a last-minute change of retrieval plan due to the change in the security situation on the ground.
In the 2014 general election, the EVMs of Saria and several other polling stations had been looted and broken by miscreants during the retrieval. (The contributor is Project Director, DRDA, East Kameng. The write-up is based on the narration by Jorjo Yangfo, Presiding Officer, Sario.)