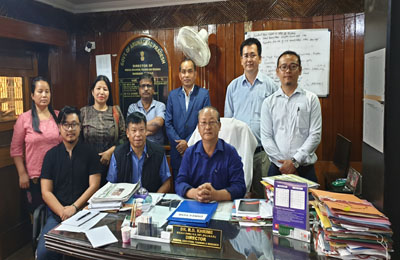 NAHARLAGUN, Apr 30: The directorate of medical education, training & research is going to monitor the admission system in AYUSH, especially in the state’s homoeopathic medical college.
This was disclosed by Director of Medical Education (DME) Dr RD Khrimey during a meeting with medical officials and officials of the AYUSH institution here on Tuesday.
“The DME is now going to monitor the admission system of the AYUSH system of medicine, and the lone homoeopathic medical college (private) will also come under the category,” Dr Khrimey said, adding that “from this year, the selection of students will be through the National Eligibility-cum-Entrance Test.”
Assuring the government’s support in promotion of medical education in the state, the DME urged all the stakeholders to extend their support in this regard.
North East Homoeopathic Medical College & Hospital (NEHMCH) Chairman Bulen Teli highlighted the problems that have been faced during the admission process, and other issues, during the meeting.