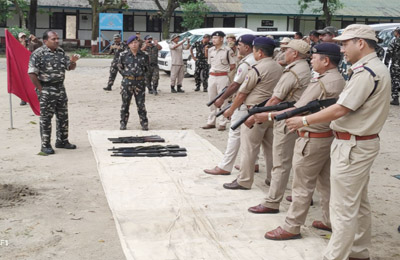 SENKI VIEW, May 4: The capital police in collaboration with the 138 Bn CRPF conducted a four-day refresher training course on ‘handling of anti-riot equipment and anti-riot drills’ at the CRPF camp here from 1 May.
Fifty-three officers, including the capital SP, the SDPOs of Itanagar and Naharlagun, and all the OC of the police stations in the capital complex were trained on the basics of handling anti-riot arms and equipment.
Firing practice of various anti-riot arms and equipment was also conducted during the training.
“The necessity of the training was felt in view of the large-scale violence which had occurred during the recent anti-PRC protests, and also to prepare for declaration of election, among other things,” said Capital SP Tumme Amo.
Similar training programmes will be conducted in the days ahead, too, he said.
The SP sought assistance from the public to maintain peace and prevent crimes.