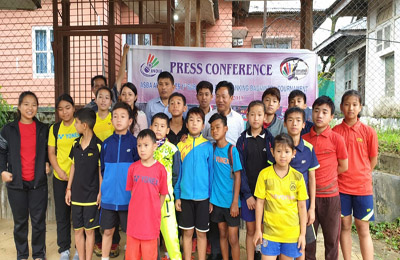 Staff Reporter
ITANAGAR, May 4: The Arunachal State Badminton Association (ASBA) is all set to organize its first sub-junior state ranking badminton league, scheduled to be held in Itanagar from 10-12 May.
Twenty-three districts and 22 badminton clubs of the state are scheduled to participate in the tournament, which will feature upcoming young shuttlers competing for the prestigious title.
Addressing the media at the press club here on Saturday, ASBA secretary Bamang Tago informed that the event will have competitions in doubles and singles categories for both boys and girls in the U-9, U-11 and U-13 age groups.
He said the top-ranked winners of the district level tournaments would be given the chance to participate in the forthcoming Dorjee Khandu Memorial Badminton Tournament.
Tago informed that more than 50 participants are currently undergoing rigorous coaching at the training camp at the Raj Bhavan badminton court, under the supervision of qualified coaches.
“We have included the tournament in the annual badminton calendar and will conduct it thrice every year,” Tago said.
“After organizing a series of leagues, tourneys, etc, I have seen that the badminton culture is undergoing a revolution in the state,” he added.
Meanwhile, six young shuttlers from the state have been selected to undergo training in Andhra Pradesh and other states under the guidance of the Badminton Association of India, while one promising shuttler is undergoing training in Indonesia, with sponsorship from the Indian Badminton Association, Tago informed.