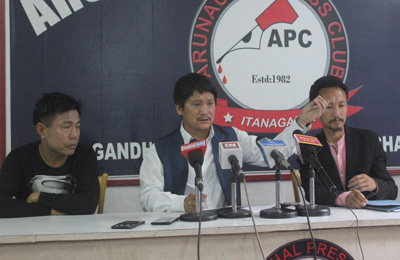 Staff reporter
ITANAGAR, May 5: The JD (U) candidate for the Palin assembly constituency in Kra Daadi district, Byabang Taj, on Sunday requested the Election Commission of India to disqualify Congress candidate Takam Pario’s candidature.
Addressing a press conference here, Taj claimed that he has “ample evidence” that Pario indulged in offering cash for votes and carrying illegal weapons during the elections, which, Taj said, “are enough for his indictment and disqualification.”
The JD (U) candidate informed that he has submitted a representation to the Kra Daadi district election officer also, seeking Pario’s disqualification.
Reacting to the claim that JD (U) workers prevented 160 voters from voting at the Rakso polling station, Taj claimed that those were “proxy voters who had already voted in other constituencies.”
“Many of those self-proclaimed deprived voters are SSA teachers who had already cast their votes through postal ballot,” Taj said.
He said re-polling was conducted peacefully in Rakso and there was no question of demanding fresh polling.
“Whoever is demanding, they are proxy voters with vested interests,” said Taj. “I do agree that we did not allow proxy voters to cast their votes at the Rakso polling station. When some outsiders tried to create disharmony by using force to cast their votes, we did not allow that to happen.”
Taj further alleged that it was “Congress goons” who created law and order problems, and that “JD (U) supporters and genuine voters were not allowed to cast their votes at the Sangram polling station.”
Stressing that last claim, the JD (U) candidate demanded re-polling at the Sangram polling station.