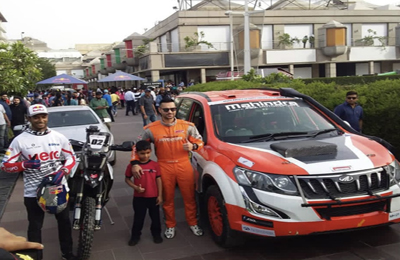 BIKANER, May 8: India’s most prestigious international motorsports event, the Desert Storm 2019, roared into the scorching sands of Bikaner here on Wednesday, with the who’s who of the fraternity ready to whip up a superstorm in their quest for honour and glory.
Three-time APRC champion Gaurav Gill, Sandeep Sidhu, Lhakpa Tsering and Philippos Matthai led the four-wheeler brigade, while Dakar Rally exponent CS Santosh, R Nataraj, Aishwarya PM and Imran Pasha topped the two-wheeler charge, setting the stage for a battle royale.
The 17th edition of the Desert Storm, an FMSCI-approved event, has become the ultimate test for man and machine, with the temperature soaring past 50 degrees this summer. The organisers, Northern Motorsports, have made a rare concession this year, scheduling the special stages early in the morning and late in the evening to counter the heat.
As many as 130 participants were flagged off from New Delhi on Tuesday afternoon, making it one of the biggest events in the country already. This included a staggering number of manufacturers, who have adopted this platform to test their cars and bikes. Right from Mahindra Adventure, Polaris, Fortuner (first-time entry), Gypsy to TVS and Honda, everybody who matters in India is here.
“This is the most amazing line-up that I have ever seen as almost all the top manufacturers are here, which is the best thing that could have happened to the sport,” Gill said at the flag off.
The motorsports fraternity also got the opportunity to cheer the comeback of the Army, who fielded 10 teams in the four-wheeler category and three in the two-wheeler category.
The four-day storm, in the rally-raid format, will take the competitors deep into the undulating dunes of the Thar Desert in Rajasthan before culminating in Jaisalmer.
Each team will be tested by extreme weather conditions, tough terrains and navigational challenges as they make their way to the finish line.
There are three categories this year, with 34 teams (comprising of a driver and a co-driver) in the ‘Xtreme’ category, 8 teams (comprising of Driver & Co-Driver) in the ‘Ndure’ category, and 40 riders in the Moto Category.
Ten special stages have been conceived for the Xtreme category and seven for the ‘Moto’ category, each tougher than the last one. The longest stage for them will feature a gruelling 200km run in the extreme wilderness. The ‘Ndure’ category follows the TSD format and is the stepping stone for the drivers to take part in next edition’s Xtreme.
The drivers and riders will be covering a distance of 2,000 kilometres over the next four days.