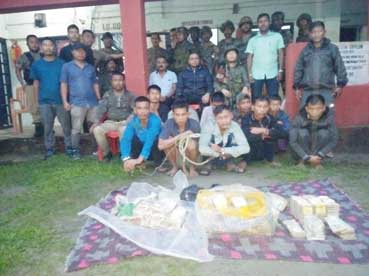 CHANGLANG, May 12: Two main accused in the recent oil company employee kidnapping case in Changlang district have been arrested by police, along with seven other accomplices.
The accused have been identified as Boksu Chakma (27) of Betcamp village, and Sikko Chakma alias Garbhanga.
The third accused, Raj Kumar Chakma of Tripura, is still at large and he is believed to have fled to his home state, informed Changlang SP Romil Baaniya.
“Efforts are being made to nab him,” the SP said.
An employee of Udipta Energy Oil Company, Kashyap Boruah had been kidnapped from Innao in Diyun circle of Changlang district on 1 April – while he was travelling in a vehicle to a rig site, along with the driver – by two persons in fatigues, claiming that they belonged to an insurgent group.
Boruah was released by his captors on 29 April, on payment of a negotiated ransom of Rs 40 lakhs, in the Sukha Nallah area, by the management of the oil company.
The police recovered Rs 28.19 lakhs from the two arrested accused, out of the Rs 40 lakhs which had been paid as ransom to secure the release of the kidnapped person.
The driver was released on the same day of the incident, after the kidnappers had snatched away his mobile phone.
Boksu Chakma has five cases of kidnapping and a case of extortion registered against him at various police stations in Namsai and Changlang districts.
He was the alleged accused in the extortion of Rs 2 lakhs from a tea garden owner in Borkhet, and the abduction of the son of a timber mill owner in Chowkham in 2017.
Sikko Chakma also has a case of attempted murder and two cases of kidnapping registered against him at the Namsai, Kharsang and Chowkham police stations.
On receiving information about the incident, the police here formed a joint team with the Indian Army and launched a search operation.
Based on local intelligence inputs, the team, headed by the SP, started search operations in all suspected localities and interrogated persons suspected to be involved in facilitating and supporting the kidnappers.
The team succeeded in arresting the two main accused after conducting raids at 10 different locations in deep jungles and villages.
Reportedly, some of the accused are key members of the Arunachal Pradesh Deprived People’s Front, headed by Nake Chakma.
The case was registered at the Diyun police station, under Section 365/341/34 IPC, read with 25 (1B) (a) of the Arms Act, on receipt of a complaint from the oil company’s management. (DIPRO)