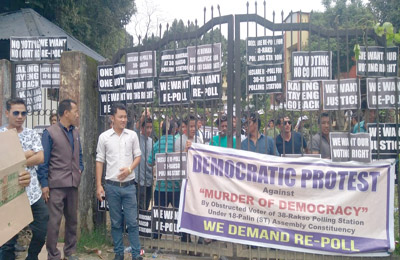 Staff Reporter
ITANAGAR, May 19: A day after the Election Commission of India (ECI) issued the notification for fresh polls in Koloriang and Tali assembly constituencies, the group of people who are claiming to be ‘obstructed voters’ of Rakso polling station staged a dharna in front of the Nirvachan Bhavan here on Sunday.
The ‘obstructed voters’ were agitating over the ECI’s overlooking their demand
for a re-poll in Rakso, in Kra Daadi district. They locked down the Nirvachan Bhavan gate and sloganeered, shouting, “It’s a murder of democracy; we are being deprived of our adult franchise.”
The protesters held placards demanding re-polling at the Rakso polling station, which falls under the Palin assembly constituency.
They accused the ECI of ignoring their grievance.