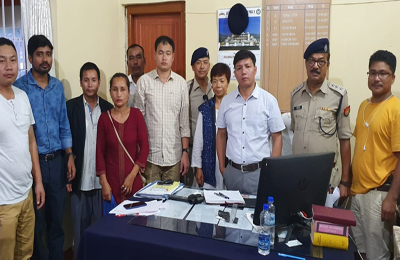 ITANAGAR, May 19: The police have solved the case involving the finding of a charred woman’s body with a bullet wound on her head in Hawa Camp (Kimin) area on 16 May.
Capital SP Tumme Amo, who was also in charge as the Papum Pare SP till Sunday and supervised the investigation, said the main suspect in the case has been arrested and a .25 bore pistol with one live round was recovered from her house. The empty case of the bullet which had been used to shoot the victim matched the live round in the pistol.
The arrest was made after assessment of various inputs from Assam Police and local sources led the police to the suspect’s house on Saturday, Amo said.
The accused, identified as Taku Mompa, from Hija village in Lower Subansiri district, was picked up on Sunday morning by a team led by the Naharlagun SDPO and the Nirjuli police station OC.
During interrogation, Mompa revealed that she had hidden the pistol in her house, following which the police seized the arm from her house in the evening, along with two mobile sets.
“Tana Reeta Basumatary, the daughter of the deceased, along with her husband and other relatives identified the deceased as Alef Basumatary, of Milanpur village in Assam. They identified the deceased from her earrings, hair clip, sandals and a scar on her left toe,” Amo said.
Police investigation revealed that the deceased had been known to the accused for about a year, and she had brought one Rani Narzary from Milanpur village, on 6 May, to work as a maid at the house of the accused.
Narzary was staying with her two children – a daughter (5) and a son (4) – at the house of the alleged accused.
Apparently, after a few days, the accused started keeping the two children away from her mother. This led to an argument, and Narzari left on 12 May for her village, leaving her children behind.
On 13 May, she asked Alef Basumatary to help her get her children back from the accused. Therefore, on 15 May, Basumatary came to the house of the accused at around 8 am, but the accused was sleeping.
Basumatary spoke to her on the mobile phone, and she also told her husband over the phone that the accused was sleeping but had assured to hand the children over at 4 pm.
However, when the husband called back the deceased after 10 am, he found her phone switched off. On 16 May, Alef Basumatary’s 90% burnt body with the gunshot wound was found in Hawa Camp, and the police in Kimin registered a case (No 04/19 us 302 IPC).
“The accused then admitted the two children at the Oju Mission School (OMS) on 16 May itself,” said Amo.
The SP said he spoke to the authority of the OMS and urged them to hand the children over to their mother, Rani Narzary.
“And accordingly, the kids have been united with their mother after about 9-10 days of separation,” Amo said.
“We cannot rule out that there are other persons involved as she (the accused) is not disclosing till now. We have sent the accused to the women police station in Itanagar,” the SP said.