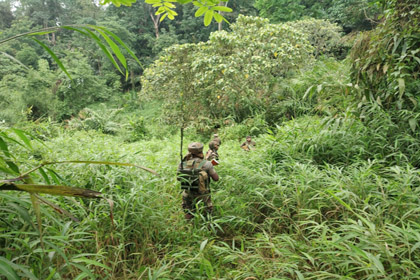 ITANAGAR, May 22: Following the assassination of national People’s Party (NPP) candidate and sitting Khonsa West MLA, Tirong Aboh and 10 others on Tuesday at 12 Mile near Khonsa, the Indian Army launched a massive search operation in the jungles of Tirap, Longding and Changlang districts on Wednesday to nab the assailants.
The army has effectively blocked likely routes of escape and intensified checks along the Nagaland-Arunachal borders, besides increasing the number of area domination teams and deployment of mobile check posts all along adjoining districts of Nagaland.
The Army is working closely in synergy with the police, civil administration and intelligence agencies to identify the suspected insurgents involved in the brutal killings.
The Indian Army has assured that “it will soon track down and bring to justice all perpetrators involved in this horrific act.” (PRO Defence)