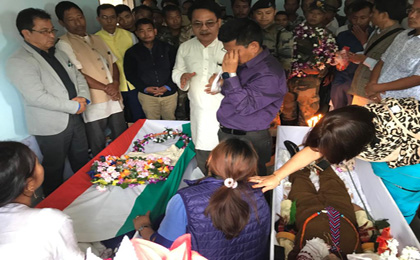 Staff Reporter
Khonsa, May 22: Hundreds of mourners and supporters thronged the residence of Khonsa West MLA Tirong Aboh on Wednesday to pay their last respects to the slain leader at Pansumthong village near the cemetery of late Ajoy Rajkumar in Tirap district on Wednesday afternoon.
While Chief Minister Pema Khandu and DCM Chowna Mein could not attend the mourning due to inclement weather in Tirap district, the chief minister sent former PHE minister Wangki Lowang as the government representative to convey condolences to Chakat Aboh, wife of late Tirong Aboh.
Khonsa East sitting MLA Wanglam Sawin, Tirap Deputy Commissioner PN Thungon and the SP were among others who paid homage to late Aboh.
The mourners laid wreaths in honour of late Aboh.
Draped in the national flag, late Aboh’s mortal remain was kept for public mourning and the funeral will be held at his native village Dadam on 24 May.
Sources in Khonsa informed this daily that all 10 other slain members will be laid to rest alongside late Aboh.
The deceased include his son, Longam Aboh (20), PSO Ponhang Agi (38), public leaders Wangoi Hakun (35), Wangngo Hakhun (30) and Wango Hakhun (30), driver Gamwang Hakhun (28), teacher Tangro Atoa (47), Matlam Aboh (20), driver Patwang Sumpa (20) and PSO Khundong Siksa (50).
The Arunachal Pradesh Government on Wednesday declared a one-day state mourning on 24 May as a mark of respect to the departed soul of Khonsa West MLA Tirong Aboh.
The national flag will fly at half mast throughout the state and there will be no state function on the day of mourning, a government notification said.
It has also been decided to provide ceremonial gun salute during the funeral by the Arunachal Pradesh Police along with other courtesies to be extended by the district administration.