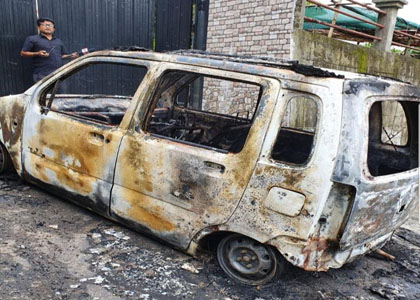 Staff Reporter
ITANAGAR, May 31: A man drove his car alongside the entry gate of the residence of state BJP president Tapir Gao here on Friday morning, and set fire to the car after brutally killing a puppy with his dao and throwing its body near the entry gate.
The police have identified the man as one Tongam Jomoh, who is apparently the president of a Naharlagun-based organization, the All Arunachal Abo Tani Association, and search is currently underway to arrest the man.
Capital SP Tumme Amo informed that the accused drove his white Wagon R car up to Gao’s gate at around 6 am, killed the puppy, and proceeded to set fire to his own car.
“The accused ran away after security personnel deployed at Gao’s residence came outside the entry gate,” the SP said, adding that a case has
been registered against the accused for arson and for killing a dog, based on a complaint lodged by Gao’s wife.
Gao is currently in New Delhi, and was not in the house when the baffling incident occurred.
A letter, allegedly signed by Jomoh, threatening the state BJP president of dire consequences had earlier gone viral on social media platforms. In the letter, the accused demanded that Gao withdraw his decision of having given party tickets to Chowna Mein and Jummum Ete Deori in the last assembly election, and issued death threats to the two leaders, too.
Amo said the police are investigating the case, and that more details would be unearthed after the accused is arrested and interrogated.
“We have taken note of the said letters, but at this point we cannot be certain that it was the sole motive behind the incident. There could be other reasons also. The police are investigating the case from every angle,” the SP said, adding that the police raided the house of the accused in the morning but he was not there.
On being contacted, Gao alleged political motive behind the incident.
Talking to this daily, Gao said, “I have no personal enmity with anyone. This is the act of antisocial elements to show to the new government that they exist and can create trouble. But the police and the administration are working on it, and I am sure the accused will be soon arrested.”
Meanwhile, the Adi Baane Kebang (ABK) has strongly denounced the barbaric act, and demanded that the state government take immediate measures to arrest the culprit and award him punishment as per the relevant sections of the law.
The ABK said it will conduct a peaceful sit-in protest at the IG Park tennis court in this regard on 1 June.
The ABK Youth Wing has also strongly condemned the incident, and appealed to each and every organization to “condemn such inhuman act.”
“It is a pure act of contempt of humankind and law and order. We strongly appeal to the capital administration to investigate and nab the culprit immediately,” it said.