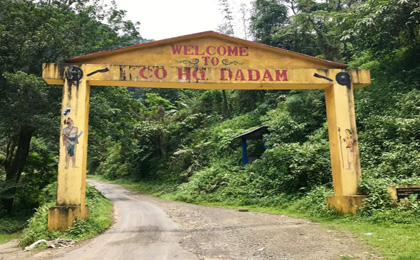 [ Tongam Rina ]
KHONSA, May 31: Supporters of Tirong Aboh, the NPP MLA who was killed on 21 May along with 10 others, have appealed the political parties of Arunachal to ensure that his widow, Chakat Aboh, is elected uncontested in the bye-election for the Khonsa West assembly constituency.
“We don’t care which party she chooses, but she has to represent us in the legislative assembly. Right now she is in a trauma and unable to speak, but the people of the constituency want her as our representative,” said a supporter.
Many people that this reporter spoke to shared the same sentiment.
“If an election is held, our fear that he was eliminated because of political reasons will be confirmed,” said a supporter.
One supporter said Chakat Aboh should join the BJP, “so that the NSCN (IM) does not indulge in violence.”
The supporter, who squarely blamed the NSCN (IM) for the massacre, said the only way the Centre could lessen the pain of the supporters would be by making sure that Chakat Aboh is elected unopposed, and that the BJP does not field a candidate.
“Since the Centre, which is ruled by the BJP, has signed a framework agreement with the NSCN (IM), it should not be a problem,” he said.
The supporters also appealed to NPP president Conrad Sangma and Arunachal NPP president Mutchu Mithi to negotiate with the central and state BJP leadership, so that no opposition candidate from the BJP is put up.
The 11 April election was a straight contest between Aboh and the BJP’s Phawang Lowang. Aboh won by a margin of 1055 votes.
“Right now, we don’t care about party. We just want to see that the legacy of Tirong Aboh continues,” said another supporter.
Supporters of Tirong Aboh in Itanagar also reportedly met with the NPP leadership to chalk out further plan. The NPP refused to share the details, but apparently the party is willing to negotiate with other political parties not to field anyone in the bye-election.
Another supporter said Aboh’s main workers were killed with him, “and if election is held, there will be more violence.”
“Chakat will win the election, but there will be more bloodshed,” said another.
“Chief Minister Pema Khandu wrote a heartfelt condolence message to the widow of Tirong Aboh, but we have not heard from him again, so we do not know what is in his mind,” said a supporter.
“As our chief minister, he should come here and reassure us and listen to our grievances,” said another.
Even as the supporters say that Aboh’s widow should be elected uncontested, it remains to be seen what step she herself takes next.
The bye-election has to be held in the next six months.
Tirong Aboh, along with 10 others, including his son and nephew, was killed on 21 May in Bogapani area, some 20 kilometres from Khonsa township. Aboh’s entourage was coming from Dibrugarh in Assam when they were ambushed by suspected NSCN (IM) terrorists. (None of the people this reporter spoke to wanted to reveal their names.)