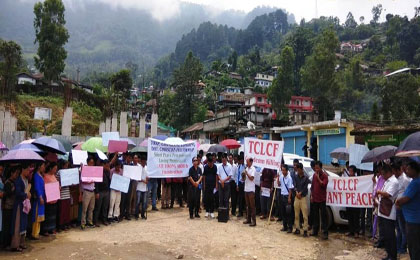 Itanagar, May 31: The Tirap, Changlang, Longding Baptist Christian Fellowship (TCLBCF) has sought a CBI inquiry into the Tirap massacre, in which 11 people, including sitting MLA Tirong Aboh, were killed on 21 May.
Demanding immediate arrest of the culprits involved in the killing, the TCLBCF took out candlelight marches in Lazu, Khonsa and Deomali in Tirap district and Kharsang in Changlang district on Friday to protest the killings.
The marches were preceded by observance of a two-minute silence and prayers for peace of the departed souls.
The TCLBCF described the massacre as “an attack on the peace-loving people of Tirap.
“Although we may have been temporarily brought to our knees in this hour of grief and despair, we stand shoulder to shoulder in the promotion of peace and democratic values in the TCL region,” it said, terming the massacre “an attack on civilization, peace and development, and against all that people hold dear.”
“There is no greater crime than killing fellow human beings,” it said.
Meanwhile, the Arunachal Civil Society (ACS) in a representation to the chief minister on Friday demanded that the state government hold a discussion on the law and order situation in Tirap, Changlang and Longding (TCL) districts in its first cabinet meeting.
The demand comes in the wake of the assassination of MLA Tirong Aboh, along with his son and nine others, by suspected NSCN militants in Tirap on 21 May.
Demanding immediate measures to nab the culprits involved in the “political assassination” of Aboh and the others, the ACS also urged the Centre to immediately scrap “the so-called ceasefire agreement” with the NSCN (IM).
“The grave situation in Tirap, Changlang and Longding districts, arising out of insurgent-related activities, is well known to you,” the ACS said in its representation.
“We have strong reason to believe that the assassination is political in nature and reflects the casual attitude of the government of India towards the people of Arunachal Pradesh,” it said.