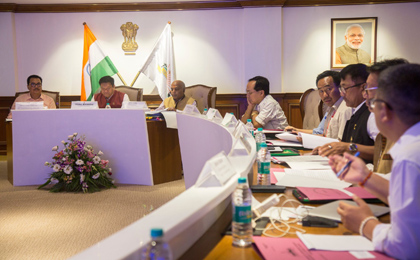 ITANAGAR, Jun 2: The state cabinet in its first meeting chaired by Chief Minister Pema Khandu on Sunday took several major decisions to strengthen the education system and law and order in the state.
After deliberations, the cabinet decided that all out-of-turn promotions in various departments will be revoked, and that there will be only one school education director, after merging the posts of the elementary education and the secondary education directors.
The cabinet also decided that pre-board exams for Classes 10 and 12 will be conducted in December, and students who secure less than 33 percent marks and have less than 75 percent attendance will not be permitted to sit for the CBSE exams.
Under the Integrated Scheme for School Education, only one district project coordinator per district will be appointed through a “fresh and transparent selection process,” the cabinet decided.
One of the major decisions of the cabinet is to frame a state education policy within three months.
The cabinet also decided that, in order to streamline the process of granting scholarships to eligible students, the scholarships from the SJETA will be transferred to the education department.
It was also decided to provide free textbooks at the start of the academic year, and to do away with the ‘book return policy’.
By another cabinet decision, teachers will have to forward their requests for transfer and other grievances only through the proper channel and not directly to the higher authorities. Any lapse in this regard will be viewed adversely, the cabinet resolved.
Some other decisions that were taken during the cabinet meeting are: providing laptops, printers and scanners to 285 government secondary and government higher secondary schools; strengthening the model residential schools and the SCERT; releasing stipends to eligible students studying in elementary classes only through the DBT mode; starting the law college in Jote in July; and starting the government model degree college in Palin this year.
To strengthen the state police, the cabinet decided to create additional manpower in the police department in phases. It approved the creation of 1000 posts at different levels in the department.
The government has also decided to make the emergency response support system operational by 31 July.
In the Ojing Tayeng murder case, the reward for providing information about the culprits has been increased from Rs 1 lakh to Rs 3 lakhs.
The government has also decided to expedite and complete the investigations in the Toko Yame and the Ngurang Pinch murder cases.
The cabinet meeting was attended by all the newly sworn-in ministers. (CMO)