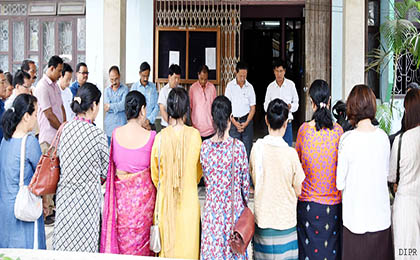 NAHARLAGUN, Jun 10: Former information & public relations (IPR) director Supriyo Deb passed away on Sunday while on his way to Dibrugarh in Assam for a health check-up.
Reportedly, Deb made a stop at North Lakhimpur for refreshment, but had to be rushed to the government hospital in Dhemaji after he complained of chest pain.
“The doctor there referred him to a hospital in Dibrugarh, but he breathed his last while getting into the ambulance,” a relative of Deb informed.
His mortal remains were brought to his Harmuty residence, and his last rites were performed at the Bihpuria cremation ground on Monday.
A large number of officials from the IPR and printing departments paid their last respects before his last rites were performed.
Born on 1 May, 1952, Deb had joined the government press as a foreman in 1977. Working his way up, he was promoted as the IPR & printing director in 2001, and retired as the director of printing in 2010.
Condolences have also poured in from various quarters, with Governor BD Mishra and Chief Minister Pema Khandu also praying for the departed soul.
The chief minister conveyed deep condolences to the bereaved family and extended solidarity on behalf of his family, his colleagues in the government, and the people of Arunachal Pradesh.
In his condolence letter, Khandu wrote: “Late Deb was a fine gentleman and a very good human being. His services to the state of Arunachal Pradesh as the director of IPR&P will be remembered for years to come. He contributed immensely in strengthening the department of IPR and printing during its formative days.”
He prayed to the almighty to bestow the bereaved family members with the strength to bear the irreparable loss.
The Arunachal Pradesh Union of Working Journalists, the Arunachal Press Club and the Arunachal Electronic Media Association also conveyed their condolences to the bereaved family and prayed for the departed soul to rest in eternal peace.
The media community expressed deep shock upon receiving the news of Deb’s demise. He had maintained cordial relations with the press community even after his retirement.
Arunachal Pradesh Congress Committee president Takam Sanjoy also offered condolences to the bereaved family.
“Late Deb was a great philanthropist, a man of discipline, and a kind and generous person. He was one of the most compassionate people I have ever met. I am deeply shocked and saddened to hear about his untimely demise,” Sanjoy said in a message.
State Election Commissioner Hage Kojin also termed Deb’s passing away very unfortunate, and said his valuable contributions to both the departments would always be remembered.