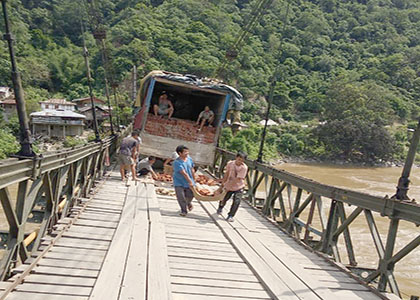 RAGA, Jun 11: At the stroke of midnight on Monday, driver Jaidul Ali created a midnight drama when he secretively drove his heavily loaded truck (AS-18C-3096) onto the ageing Bailey suspension bridge over the Kamle river in Tamin in Kamle district.
The chord reinforcement of the weak bridge broke, resulting in the truck, loaded with 14 metric tons of bricks and hardware items, causing the bridge to collapse dangerously in the middle. On seeing alarmed residents gathering at the bridge, Ali fled the scene. He was arrested by the police on Tuesday from a nearby jungle.
Kamle SP John Pada confirmed that the driver has been arrested and truck seized.
“A case has been registered against the driver (Raga police station Case No 11/19, under Section 279/188/283 IPC),” informed Pada.
Kamle DC Moki Loyi along with local MLA Terin Dakpe inspected the bridge on Tuesday. Later, in the afternoon, the DC issued a prohibitory order against plying of heavy vehicles, including loaded Tata Mobiles or pickup trucks, on the bridge.
The district administration had earlier notified a permissible weight of upto nine tons to ply on the weak bridge. A notice board was erected at the entrance to the Bailey bridge, and the Tamin market committee was entrusted with keeping vigilance.
The bridge is the lifeline to Kamle district headquarters Raga and the entire Upper Subansiri district.
Tales of the authority’s apathy and the local leaders’ inertia over the condition of the Bailey suspension bridge over the Kamle river have been spinning over the last four decades. The bridge held on for four decades despite poor management by the district administration and lack of political will among the local leaders to upgrade it.
Reportedly, a watchman had once been posted at the bridge to permit only vehicles with permissible weights to cross the bridge. It was later alleged that the watchman had started collecting taxes to allow heavily-loaded trucks to ply on the bridge.
The bridge was reportedly built in the late 1960s (no exact record is available). It had collapsed in 1998 due to a fire accident which had occurred in the nearby houses.
After the 121-metre bridge had snapped, a tragic incident had occurred, in which as many as 10 people reportedly drowned in the Kamle river while crossing it on inflated country boats – which had become the only way to cross the river.
The bridge was restored by the Border Roads Organisation (BRO) in 1999, using similar chord reinforcement and cables.
“On 19 July, 2014, the state government had taken over the bridge from the BRO and handed it over to the union ministry of road transport and highways (MoRTH), and later, on 13 May, 2016, the MoRTH had entrusted it to the highways department for preparation of a detail project report in anticipation of termination of the concessionaires (ECI),” said PWD Highways Yupia Division EE Bini Pelen.
The bridge has long since outlived its life expectancy. Currently, the compensation seekers are stalling the execution of the Trans-Arunachal Highway that passes through Tamin and Raga. But it does not change the fact that the longer it takes to repair the bridge, the danger will remain.