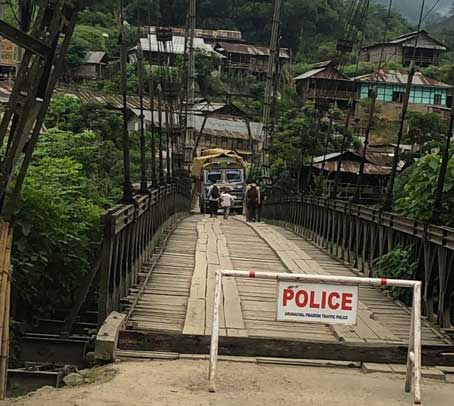 Staff Reporter
RAGA,Jun 13: Following the prohibitory order issued by the district administration of Kamle, the commuters and daily private service transporters are reportedly having tough time while crossing Tamin bailey suspension bridge.
The department is yet to start restoration works after chord reinforcement was broken due to overloaded truck even though the Chief Minister Pema Khandu on Tuesday directed the Public Works Department (PWD) to restore the bridge at the earliest.
The district administration has restricted even light weight vehicles to ply on weak bridge. It is said permissible weight according to notice is 9 ton before the chord reinforcement was broken. However, after the bridge chord reinforcement was broken, the DA has put restriction on all loaded vehicles to cross the bridge.
Sources at Raga informed The Arunachal Times that transporters have to unload the materials on one end of the bridge and cross without materials and passengers. Materials including cements and hardware have to be manually transported across the bridge which causes traffic jam at either sides of the bridge.
“How long shall we carry our building materials and other heavy stuff across the bridge? It is not possible at all to carry hardware materials as management of labour is big issue in small town like ours” said a resident at Raga urging the department to restore the bridge at earliest.
The official source added that order has been given to contractor for the restoration, and that once the contractor arrives with tools, plants and labour, the restoration will begin.
The bridge was taken over by the Ministry of Road Transport and Highway in 2014.
“We are roping in services of chord reinforcement manufacturer and parts have been ordered from Kolkata. The parts are not always readily available” said Commissioner PWD Bilatee Pertin.
“These bridge parts are not readily available in open markets” Pertin added hinting restoration is only possible depending on availability of the materials.
The Commissioner expressed displeasure over local public for violating the prescribed permissible weight limit as cautioned by the PWD.
“Till partial restoration works are completed, the local public will have to bear with the inconvenience, accentuated by the delays” he said.