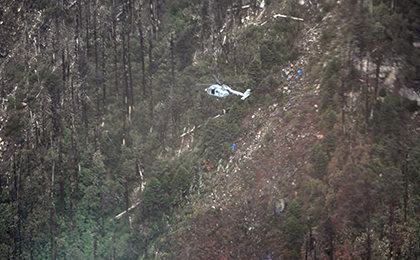 Staff Reporter
ITANAGAR, Jun 14: The mortal remains of 13 IAF personnel are yet to be retrieved from the crash site in Siang due to bad weather conditions.
The 13 IAF personnel had lost their lives after it crashed in the mountains of Shi Yomi and Siang districts on June 3 while on its way to Mechukha from Jorhat in Assam.
The process of recovering the mortal remains is still on at crash site by rescue team as weather continues to be marginal, thereby affecting the pace of recovery, said defense spokesperson.
The Cockpit Voice Recorder ( CVR) and Flight Data Recorder ( FDR)  has been recovered at crash site on Friday.
All efforts are being made to expeditiously complete the task using all resources of Civil, Army and IAF. The recovery team is braving the treacherous terrain and inclement weather in order to bring back the mortal remains as soon as possible, the spokesperson said.
The mortal remains and other material evidence have to be picked up by helicopters and brought back to Jorhat in stages.
The 13 personnel who lost their lives were Wing Commander GM Charles, Squadron Leader H Vinod, flight lieutenants R Thapa, A Tanwar, S Mohanty and MK Garg, Warrant Officer KK Mishra, Sergeant Anoop Kumar, Corporal Sherin, Leading Air Craftsmen SK Singh and Pankaj, and non-combatants (E) Putali and Rajesh Kumar.
The IAF has flown around 200 sorties towards the AN-32 search and recovery operations and is sparing no efforts in recovering the remains of its personnel for which 08 helicopters have been deployed, said official sources.
After days of failed efforts, the wreckage was sighted on 11 June, near Tato, at an approximate elevation of 12000 ft by an IAF Mi-17 helicopter.
Extensive aerial and ground search were carried out for eight days in the tough terrain and unpredictable weather of the area before search and rescue teams located the wreckage on the ninth day, 11 June.
On 12 June, a team of nine IAF personnel including mountaineers, four Army Special Forces personnel and two local mountaineers were dropped at the campsite. The next day, they reached the crash site.