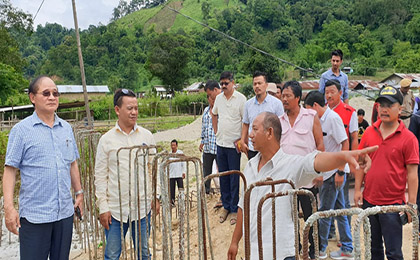 ITANAGAR, Jun 15: Former Chief Minister and Sagalee MLA Nabam Tuki visited several projects sites under his assembly constituency on 15 June.
Inspecting the under construction steel girder bridge over river Pare at Nimte that connects Rigo village, Tuki instructed the executive engineer (EE) of the PWD Sagalee division to
immediately start the erection of super structure so that the PMGSY work by the RWD on the river bank is expedited.
He also directed the RWD EE to immediately mobilise human resources and materials for the taking up the road pavement work.
When apprised by the villagers of the danger posed by the existing 11KV HT line, which led to electrocution and subsequent death of one person in the past, Tuki asked the power department of Sagalee to shift the 11KV HT line immediately.
He also assured to bear the cost of the shifting of the line.
Later, he inspected the steel girder bridge over river Pare at Balapu under PWD and appreciated the department on completion of the project.
He also inspected the ongoing construction site of the Government Engineering College at Toru under RUSA, where Tuki was accompanied by Director Higher & Technical Education T Talom, along with his team of officers.