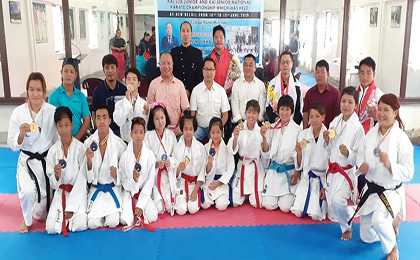 Staff Reporter
NAHARLAGUN, Jun 17: Arunachal Pradesh bagged six gold, two silver and five bronze medals in the just-concluded KAI Sub-junior and Senior National Karate Championship in New Delhi.
The state secured the 3rd rank in the senior category and the fifth in the sub-junior category in the championship, which was held from 10 to 13 June.
While Johny Mangkhiya and Raja Yangfo bagged a gold medal each in the senior women’s and men’s category in individual Kumite (fight), Sumpi Chege secured a silver medal in the women’s individual Kumite.
Mesom Singhi, Goda Asha, Lokam Maya, Bamang Yamu and Bamang Yakum contributed one gold medal in the women’s team Kumite.
In the sub-junior category, while Anyee Sonam and Aman Dui bagged a gold medal each in the girls’ individual Kumite in their respective age and weight categories, Deepok Jomoh won a gold medal in the boys’ below 46 kg in individual Kumite.
Mekhiya Sono bagged the silver medal in the girls’ individual Kumite.
While Menam Kamsar and Risen Yun bagged a bronze medal each in the girls’ individual Kumite, Jide Dargung, Guma Lingram and Bhai Sangyu won a bronze medal each in the boys’ individual Kumite in their respective age and weight categories.
The Arunachal Karate Do Association (AKA) felicitated all the medal winners at function held here on Monday.
Addressing the function, Karate Association of India (KAI) president Likha Tara highlighted the performance of the karatekas of the state in the championship.
He said the state could have won a couple of more medals had not two medal prospects missed the championship due to train delay. He said the train they were travelling in got delayed by 16 hours.
Expressing satisfaction over the overall performance of the team, Tara, who is also the president of the AKA, advised the karatekas to maintain regular and hard practice in order to further improve their performance.
Tara, who was awarded black belt 8 Dan by the KAI during the championship and became a ‘Hanshi’, asked the karate officials in the districts to be proactive in their work.
He said the senior karate players, the officials and instructors have great roles to play in identifying and grooming young talents.
Arunachal Olympic Association (AOA) secretary general Abraham K Techi also attended the function and motivated the karatekas to take up the sport sincerely.
Techi informed that demands have been placed before the state government for development of a mega sports complex, where there will several multipurpose indoor stadiums, besides the main outdoor stadium, swimming pool, cycling tracks, etc, preferably at Hollongi near the site for the proposed greenfield airport.
Techi said the AOA has proposed to the government to make a proposal to the Indian Olympic Association and other granting authorities to award the 2024 National Games to Arunachal Pradesh.
He said since one of the main objectives of organizing the National Games is to develop sports infrastructure of the host state, the Centre, as being practiced, would provide the necessary funds for the development of the required infrastructures once the state is awarded the Games.
The function was attended by Paragliding Association of Arunachal president Vijay Sonam, AKA technical director and chief coach S Deben Sarmah, AKA vice president Yarda Niki, treasurer Tai Hipi, senior karates and instructors.