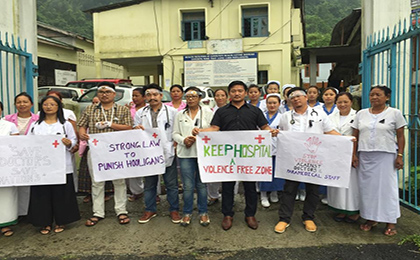 Staff Reporter
ITANAGAR, Jun 17: All non-essential services, including OPD and routine OT, remained cancelled but emergency and casualty services continued in all government and private hospitals across the state on Monday as part of the nationwide protest launched by the Indian Medical Association (IMA) following the recent attacks on doctors and hospitals in West Bengal (WB).
Medical services were badly affected as the state unit of the IMA organized protests at all government and private hospitals.
State IMA secretary Dr Jego Ori informed that the non-essential services have been cancelled in all the hospitals, PHCs and CHCs of the state for 24 hours, from 6 am on Monday till 6 am on 18 June.
At the TRIHMS in Naharlagun, over one hundred doctors and 50 MBBS students protested on the institute’s campus.
They shouted slogans demanding security for doctors and staffers in hospitals, and urged the state government to pass the Arunachal Pradesh Protection of Medical Service Personnel and Medical Service Institutions (Prevention of Violence and Damage or Loss of Property) Bill, 2018, at the earliest.
“We do not want to cause inconvenience to the public but we are forced to take the step because it is the only option left for us to place our grievances before the government,” Dr Ori said.
He said the state IMA submitted a representation to the state’s health secretary, the chief minister, and the prime minister on Monday, seeking “immediate enactment of the model central healthcare protection” and early passing of the protection of medical service personnel bill.
Condemning the attacks on doctors and hospitals in West Bengal, the state IMA demanded exemplary punishment for the culprits involved. It also demanded a central act against violence in hospitals throughout the country, saying violence in hospitals would adversely affect patient care.
“Not only are the patients undergoing treatment in the institutions, but also there are indirect consequences. Institutions will be reluctant to take up complicated and risky patients, which will affect critical care,” it said.
At the RK Mission Hospital (RKMH) in Itanagar, the protesting doctors, led by state IMA president Dr Lobsang Tsetim, said threatening and hitting doctors and hospital staffers “is not acceptable and should be condemned by one and all.”
However, despite the fact that emergency and casualty services were not cancelled during the protests, a number of patients who had queued up at the RKMH since morning complained of not receiving medical attention due to the absence of doctors.
The doctors of Heema Hospital in Itanagar also staged a protest outside the hospital’s entrance.
State IMA vice president Dr Kesang Wangdi Thongdok said there is need for a law to protect the doctors.
“As doctors, we always try our best to provide the best care to the patients. However, at times there will be casualties, but it is unfair to blame the doctors for them. We are not gods,” he said.
Expressing concern over the increasing cases of attacks on doctors, he said no doctor would every try to harm their patients but always try to save them.

Meanwhile, the protesting doctors in West Bengal on Monday agreed to withdraw their weeklong stir after Chief Minister Mamata Banerjee announced steps to scale up security at hospitals.
An assurance to call off the strike came at a meeting Banerjee held with representatives of the striking doctors at the state secretariat.
“We are satisfied with the meeting,” a representative of the doctors said, assuring Banerjee that the strike is going to be called off.
A formal announcement on withdrawal of the strike is likely to be made from the epicentre of the protest, the NRS Medical College and Hospital. (With PTI input)