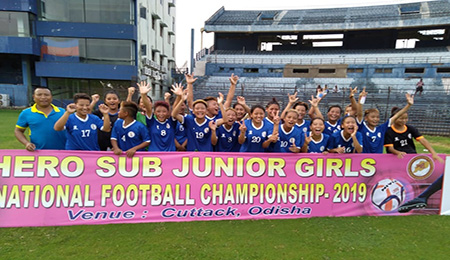 CUTTACK, Jun 18: The sub-junior girls’ football team from Arunachal Pradesh made history as it entered the final of the Hero Sub-junior Girls’ National Football Championship after beating Gujarat 4-0 in the second semifinal which was played here in Odisha on Tuesday.
Kai Rumi (Ana) scored three goals, while Giani Ramsing scored one goal for Arunachal.
Arunachal will now lock horns with Jharkhand for the championship title in the final match on 20 June.
Jharkhand reached the final after it defeated Bihar in the first semifinal of the championship.
Congratulating the team Arunachal Pradesh Football Association secretary Kipa Ajay said, “Our girls have proven that football is moving in the right direction.”