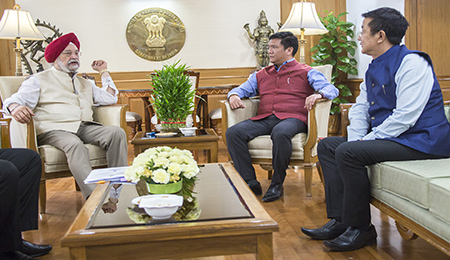 NEW DELHI, Jun 18: Arunachal Pradesh Chief Minister Pema Khandu called on union Minister of State (Independent) for Civil Aviation, Hardeep Singh Puri, here on Tuesday and briefed him on the progress of the land acquisition process for the greenfield airport in Hollongi.
The chief minister requested for expeditious completion of the project through a project monitoring committee, to be constituted under the chairmanship of the union civil aviation secretary, with the chief secretary of Arunachal as one of the members.
He also requested the union minister for early start of commercial flight services from the airport in Tezu in Lohit district, constructed by the Airports Authority of India.
Also requesting for helicopter services under the regional connectivity scheme (RCS) to be made operational, Khandu said the selected operators under the Ude Desh ka Aam Naagrik programme are yet to start actual operation in Arunachal, and requested for intervention, so that the heliports under the RCS become operational. (CMO)