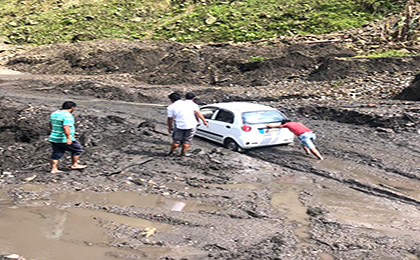 Staff Reporter
ITANAGAR, Jun 19: As many as 30 vehicles with passengers were stranded for nearly three hours after a car got stuck in the muddy road in the Kala-Miti area between Hoj and Potin, on the Trans-Arunachal Highway (TAH), on Wednesday.
The vehicles were coming from Daporijo, Palin, Raga and Ziro, and several were going in the opposite direction, from Itanagar.
“We have been stranded here for hours as one small car was stuck in the middle of the muddy road,” said a passenger who was coming from Ziro.
The road had been overrun by a mudslide, leaving only a narrow passage which commuters in vehicles had to negotiate through. However, the mud was cleared afterwards by the executing agency.
Every time there is a heavy downpour, the condition of the Hoj-Potin and the Potin-Daporijo stretches of the TAH becomes deplorable and unfit for use.
Official sources said minor restoration work is underway, considering the situation.
The stretch of the road is dangerous with several accidents having been reported since the TAH work started. Last year a college student lost his life when the car he was in careened off the road in the same stretch.