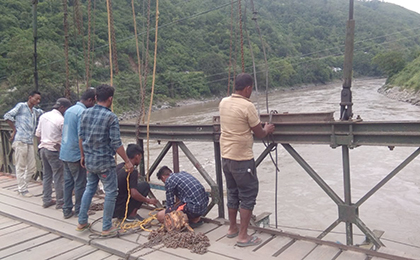 Staff Reporter
ITANAGAR, Jun 19: Restoration work on the Tamin Bailey suspension bridge in Kamle district has begun on a war footing.
The chord reinforcement of the bridge had broken when a heavily loaded truck had been driven onto the bridge on the midnight of 10 June.
The district administration has, however, not relaxed the prohibitory order on the permissible weight on the bridge, in view of its weakness.
The restoration work is being carried out by Itanagar-based private firm Tama Fabrication Works.
Kamle DC Moki Loyi along with officials from the PWD on Wednesday inspected the bridge and assessed
the progress of the restoration work.
“The chord reinforcement has been replaced, and other works are on in full swing,” said an official who did not want to be named. He expressed hope that loaded vehicles would soon be able to ply on the bridge.