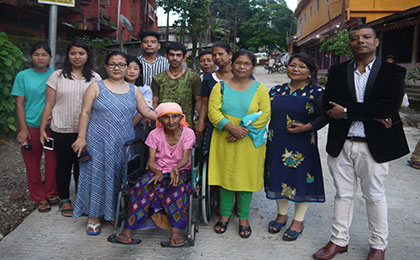 NAHARLAGUN, Jun 22: Seventy-five-year-old Krishna Kumari Chetry was admitted to the Swadhar Griha run by the Oju Welfare Association (OWA) here on Saturday, after having been rescued by the Indian Army from the dense jungles of Lathao circle in Namsai district on 14 June.
Reportedly, Chetry was lost in the jungles with only an umbrella for 15 days. The Army personnel who found her rushed her to the district hospital, where the doctors treated her and stabilized her health.
Namsai CDPO Wihong Khimhun and Swachh Bharat prerak Kawang Lowang brought Chetry here and placed her in the care of OWA chairperson Anya Ratan.
The Namsai district administration and police are making efforts to find the old woman’s family and relatives as she herself cannot recall where her family and relatives are.
“Her husband had reportedly left for Nepal, leaving her with their two sons, who also abandoned her. She probably lost her way in search of a place to live” Khimhun said.