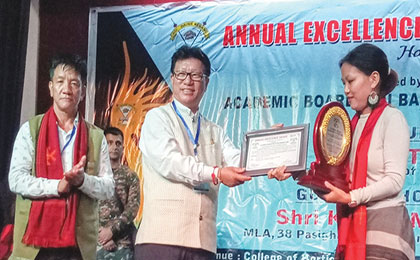 PASIGHAT, Jun 22: The toppers in the AISSE, AISSCE, JEE and NEET, along with achievers in various fields were honoured with the ‘Annual Excellence Awards-2019′ instituted by the academic board of the Adi Baane Kebang (ABK), during a function here in East Siang district on Saturday.
Education Minister Taba Tedir, Pasighat MLA Kaling Moyong, chief patron B Perme, DC Kinny Singh, SP Prashant Gautam, CHF Dean Prof BN Hazarika, ABK president Getom Borang, secretary-general Okom Yosung and others presented the awards to the achievers.
Tedir in his address assured that he would extend “sincere support to promote the Adi language as a third language in the Adi inhabited areas.”
“The pending work for the state university will be taken up on priority and defunct schools will be closed,” he informed.
The minister advised the students to be punctual, disciplined and attentive to studies, and said the education scenario has changed a lot compared to the olden days.
“Education should not be a means to get jobs or to be employed but should be based on moral values, attitude and character,” Tedir said.
He commended the ABK for its untiring efforts in streamlining the society and ensuring the vibrancy of the kebang system.
“The NGO is playing a vital role, both in the community and the state level, in promoting peace and harmony among the tribal societies,” Tedir said.
Moyong in his address stressed the importance of yoga, games and sports in a students’ life. He highlighted some of the government’s plans, policies and achievements, and commended the ABK for organising the event.
Earlier in the day, a marathon themed ‘Run for education’ was conducted to spread awareness on education.
Tedir, accompanied by Moyong and government officers, also visited JN College, the state university site, the polytechnic college, and the sainik school in Niglok. (DIPRO)