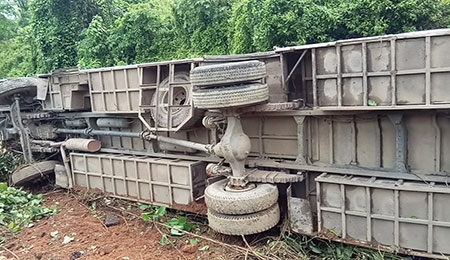 BANDERDEWA, Jun 23: A Dimapur-Pasighat night bus met with an accident on the national highway at Bogpur, near Banderdewa, at around 5 am on Sunday.
Sources in the Banderdewa police station informed that the Blue Hill night bus (AS-01KC-6252) was on its way from Dimapur in Nagaland to Pasighat in East Siang district of Arunachal Pradesh.
There were around 27 passengers, and, as per the information received, nine persons sustained injuries. The driver and his assistant are reported to be grievously injured, while four passengers are under observation at the Dholpur public health centre (PHC).
Most of the passengers received minor injuries and were discharged from the PHC after being treated. The remaining passengers were shifted to Banderdewa with the help of the Narayanpur police and locals.