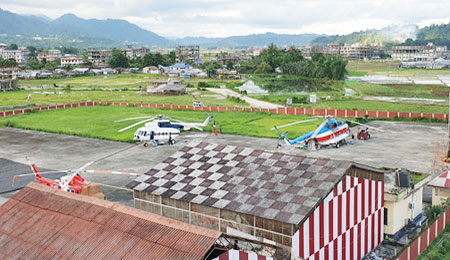 Staff Reporter
NAHARLAGUN, Jul 3: The Civil Aviation department has written a letter to the Capital Complex district administration seeking complete ban on construction of permanent high-rise buildings in the vicinity of the Naharlagun helipad, as the “upcoming high-rise building adjacent to the helipad area poses a serious threat to the helicopter operation.”
The letter requested for necessary action on priority basis to avoid suspension of helicopter operations from Naharlagun helipad by regulatory authorities.
“Several permanent structures are coming up, which may be a serious threat to the safety of helicopter operations. The strong wind of its rotors during landing and takeoff is equally dangerous to the inhabitants of those living nearby,” said Civil Aviation Secretary SK Jain in a letter written on 20 June to the Capital Complex deputy commissioner.
The letter also sought removal of temporary huts from the area adjacent to the boundary wall of the Naharlagun helipad and a prohibitory order for complete ban on construction of structures up to 100 metres of the outer boundary of the helipad.
Citing the report of Naharlagun helipad’s security in-charge regarding removal of temporary huts adjacent to the boundary wall of Naharlagun helipad and order prohibiting any construction up to 100 metres of the outer boundary of Naharlagun helipad, the letter observed that “lots of construction activities, including multi-storied buildings, are going on in the vicinity of Naharlagun helipad, especially the construction on approach and take-off funnel.'”
“During the safety action group meeting, the helicopter operators pointed out that construction activities, if not stopped immediately, will have adverse impact on safe operation of helicopters from the Naharlagun helipad. Hence, minimum safety requirements as stipulated should be made effective,” the letter said.
“Two grey-coloured mobile towers in the base leg/ final approach at approximately 260 – 500 metres from Naharlagun helipad are also causing operational hazards,” it pointed out.
The DGCA air safety team had earlier observed that the mobile towers nearby the helipad “need to be painted alternately orange and white, in a pattern not less than 1.5 metres to 3.00 metres, in rectangle, for proper visibility.”
The letter also advocated for regulation of vehicle parking during Sunday market, saying that parking of vehicles in large numbers blocks the entrance of Gate No. 1 of the helipad, which has been provisioned for emergency exit in the event of any exigency.
It further urged for removal of garbage dumped outside the helipad’s Gate No. 1 as it “emanates foul smell causing health hazard and attracting birds which have adverse effect on flight’ safety.”
“There are several lacuna which need to be taken care of by the authority, but in many cases it has been observed that the administration has not taken the guidelines seriously,” said a senior officer from the Civil Aviation department.
However, he said, the local administration has become active now after the letter to the administration by the Civil Aviation secretary.
Additional District Magistrate cum Chief Estate Officer (CEO) Talo Potom said that he, along with his staff had inspected the Naharlagun helipad on 28 June and found that no action was taken as per the prohibitory order of 3 January, 2012 and “the construction activities have already taken place.”
The CEO further informed that another prohibitory order has been issued on 28 June, prohibiting construction activities by any individual “within the limit of 100 mtrs from the crest of the outer parapet of the helipad of Naharlagun.”
Ten individuals have been directed to remove their structures and to paint the tower as per aviation norms for safety and security within two weeks.