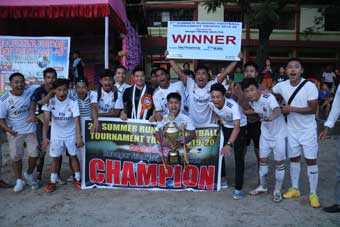 CHIMPU, Jul 4: DY Football Club (DYFC) lifted the second summer football trophy beating Champions FC 5-4 via shootout in the final at KV No. 2 playground near here on Thursday.
The match went to tie-breaker after both the teams were locked 2-2 at the end of the regulation time.
Former chief minister Nabam Tuki and Arunachal Pradesh Building and other Construction Workers’ Welfare Board chairman Jalley Sonam also witnessed the match and, later distributed prizes to the winners.
The champion team was awarded cash prize of Rs 50,000 along with the trophy.
Goalkeeper Chamak Borah of the winning team, who made a brilliant save of a penalty kick in the final match, was adjudged the ‘best goalkeeper’ of the tournament.