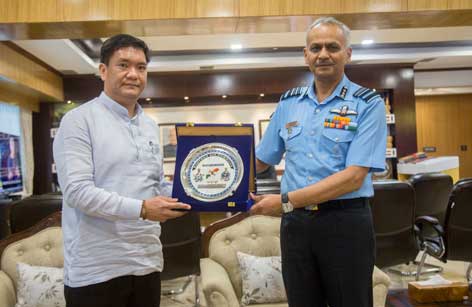 ITANAGAR, Jul 4: Air Marshal RD Mathur, Air Officer Commanding-in-Chief, IAF Eastern Air Command called on Chief Minister Pema Khandu here on Thursday and informed that the Indian Air Force (IAF) would suitably honour the locals who helped the force in the search and rescue mission after the recent crash of an AN-32 aircraft in the hills of Shi-Yomi district last month.
Thirteen IAF personell had lost their lives on 3 June as the aircraft crashed on the way to Mechukha from the Jorhat airbase.
Expressing gratitude to the Arunachal Pradesh Government for the support and assistance extended to the IAF in search and rescue operations, the AoC-in-C said, “Only with active support and cooperation of the state government through its district administrations and local people the daunting task could be completed.”
He said that “unfortunately, airlifting of the rescuers, which included local mountaineer Taka Tamut, was delayed due to inclement weather and they had to camp in the mountains for almost 11 days.”
The Air Marshal, however, informed that enough ration was air-dropped for the rescue team to survive another 15 days.
Offering condolences to the departed personnel aboard the ill-fated aircraft, Khandu assured cooperation and support to the armed forces when in need.
He also assured that local mountaineer Taka Tamut would be suitably honoured by the state government as well.
Acquisition of land for firing range in East Kameng district and for strategic installations in Shi-Yomi and Tawang districts were discussed in detail.
The IAF also offered to construct high-rise boundary wall around the firing range at Dollungmukh so that splinters do not go out and animals or people do not come in.
The chief minister requested the IAF to take the local administration into confidence and alert in advance with regard to firing exercises by the IAF at Dollungmukh.
The meeting was also attended by Chief Secretary Satya Gopal and Secretary to CM Sonam Chombay. (CMO)
Air Marshal RD Mathur also met the Governor BD Mishra at Raj Bhavan, here on Thursday.
The governor conveyed to the AoC-in-C, his deep condolences for the bereaved families of the Air Force officers and personnel who lost their life in duty in recent AN 32 aircraft crash.
“The people of Arunachal Pradesh share the pain of the irreparable loss and will always remember the sacrifices of the air warriors,” the governor said.
He also conveyed his appreciation to the Eastern Air Command for its help in recently concluded Lok Sabha and Vidhan Sabha elections and the proactive role played by the Eastern Air Command in providing assistance to the people of the state during emergencies and call of duty.
The governor, who has been spear heading the effort for the employment of local youth in the Indian armed forces through his programmes like ‘Pay back to society group’, etc, asked the Eastern Air Command Chief to explore the possibility for an enhanced quota of recruitment for the youth of Arunachal Pradesh.
The AOC-in-C assured that governor that the Eastern Air Command will do its best in the service of the people of the frontier state of Arunachal Pradesh. Commissioner to Governor, RP Upadhyaya was also present in the meeting. (CMO, PRO to Governor)