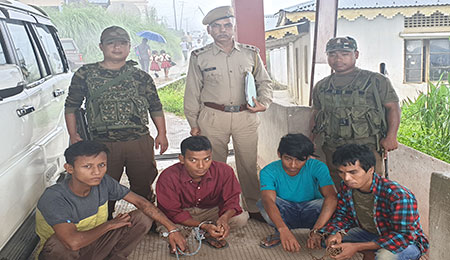 ITANAGAR, Jul 5: Police arrested ten drugs peddlers with drugs from Aalo and Kanubari over the past few days.
Six peddlers were arrested from Aalo in West Siang district while four were arrested from Kanubari in Longding district.
Those who have been arrested from Aalo are Rashidul Islam, A Hussain, M Ali, B Islam, R Ahmad and Ramzam Ali. They were working as labourers in various construction sites. They have been arrested based on information provided by the women group from LiK Kiin.
The police seized 4.5 kg suspected cannabis from their possession.
A case has been registered against them at Aalo Police Station under NDPA Act.
The drugs peddlers in Kanubari have been identified as Wangchai Atraham, Wangpoh Wangjen, Awin Nokwoham, and Bawang Wangjen, all from Luaksim village.
They have been arrested from a house in the village at around 9 pm on Thursday.
Earlier, the village council lodged a complaint with Kanubari Police Station, stating that some youths from the village were involved in drugs peddling and consuming, thereby disturbing the peace and tranquility of the villagers.
The police after registering the complaint sprung into action and arrested the four from house, where they were hiding.
“One of the four youths tried to assault us with lethal dao, but we overpowered him,” said Kanubari Police Station OC RK Rai, who headed the team of police during the raid.
Brown sugar and tools, like silver foils, spoon used to consume drugs were also found from the house, which have been produced before the district court the next day. DIPROs