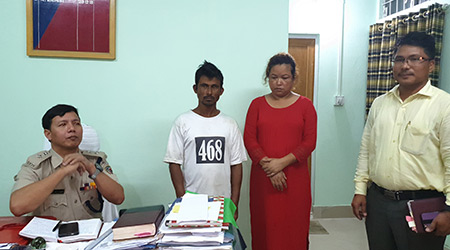 NAHARLAGUN, Jul 9: The police here arrested two persons on Tuesday in connection with the rape and murder of a woman on 5 July near the Dikrong bridge.
Capital SP Tumme Amo informed that three days after a woman in her early 40s was found dead near the Dikrong bridge, the main accused in the case, one Issak Ali, and co-accused Kalpana Basumatary, were arrested by the police from Assam on Tuesday morning.
“The main accused has confessed to the entire episode,” the SP said.
The prime accused has admitted to killing the victim and washing the evidence from her body after the murder. The police had taken into custody a stone which had been used as a weapon of murder.
As per the statement of the main accused, Basumatary, who is a lover of Ali, was the mastermind behind the murder of the victim, who was also allegedly a lover of the prime accused.
“Reportedly, Ali did not want to murder her, but she (Basumatary) manipulated him into the murder, so that they could take money from the deceased and elope to another state,” the SP informed.
“During the confession, it was also revealed that Ali had made false promises to the deceased of eloping with her. He claims to have asked her to bring Rs 1 lakh, so that they could go to another state. But it was a plot to rob the cash and elope with Basumatary,” Amo said.
“However, the deceased had not brought any cash with her and they (the accused) had to return to their place,” he said.
“The accused, who has four children, claimed that he used to often meet the deceased at the place of murder, but this time came along with his other lover, Basumatary, on a motorcycle to commit the crime,” the SP said.
Ali claimed that two of his friends were also involved, Amo said. The police are looking into the details.
Reportedly, Ali, who has been married four times, had become friends with the deceased after he had mistakenly dialled her phone number.
The SP informed that they zeroed it down to Ali after examining the calls made from the deceased’s phone.
“As per the call records, they were in touch for some time. On 5 July, Ali had called her at 4 pm from Laluk in Assam, and again at around 6 pm upon reaching Nirjuli,” he informed.
The SP assured that more arrests will be made if other persons are also found to have been involved.
The police have also seized a motorcycle (AS-07N-6563) and two mobile phones from both the accused.
The SP meanwhile appealed to the people of the state to be vigilant and take safety measures while being in touch with strangers.
He extended appreciation to the Assam Police, especially the Lakhimpur SP and the outpost IO of Bangalmara and Khelmati, the team of officers from the Nirjuli police station, and others for their active cooperation in cracking the case and making the arrests.