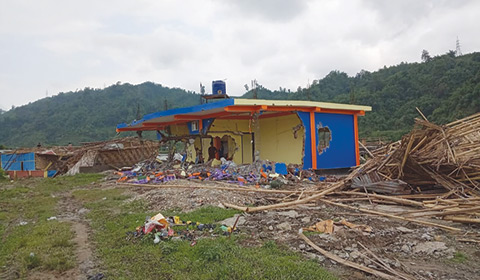 Staff Reporter
NAHARLAGUN, Jul 16: A day after the office of the additional district magistrate (ADM) dismantled nine houses located about 100 metres in the vicinity of the helipad here, the evicted landowners have now sought the state government’s intervention in the matter.
Speaking to reporters here on Tuesday, a landowner said “the government should either compensate us or buy the land.”
Claiming that they all had allotment papers and land possession certificates, she asked, “Why was the eviction carried out only in one area and not on all directions of the helipad?”
She appealed to the state government to “buy the land” of the nine landowners in question if there are problems for helicopters in landing and taking off.
Terming the dismantling of the houses in the monsoon season “unfair,” the landowner asked: “Where will the children and old people go? If there was a problem, why did they come months after the structures had been built? Officers and ministers pass through here on a daily basis; why didn’t they notice then and tell us?”
On being informed that the area had been allotted on condition of carrying out agricultural activities, such as wet rice cultivation, and not for building construction, the landowners claimed that “taking up agricultural activities was not possible when helicopters blow away our grains or scare our animals. We can’t depend on agriculture activities alone in the capital.”
“The government should understand our situation or compensate us. Storming into our land and dismantling our houses is not acceptable. Keep dismantling our houses and we will keep rebuilding in whatever way possible,” she said.
On Monday, nine houses located about 100 metres in the vicinity of the Naharlagun helipad were dismantled by the office of the ADM.
“On 30 June, under Section 133 CrPC, the landowners were served show cause notices asking them to remove their structures, and by 15 July we had to absolute the order as they could not suffice their claims to stay and construct any structure here,” ADM Talo Potom had informed reporters.
Reportedly, some structures were built in 2014 in and around the same area, but were dismantled in the same year by the ADM’s office.
On 20 June, Civil Aviation Secretary SK Jain had written to the capital complex administration, seeking a complete ban on construction of permanent high-rise buildings in the vicinity of the helipad, saying the “upcoming high-rise building adjacent to the helipad area poses a serious threat to helicopter operation.”
The ADM and his staff had inspected the helipad on 28 June and found that no action had been taken as per the prohibitory order of 3 January, 2012, and that “the construction activities had already taken place.”