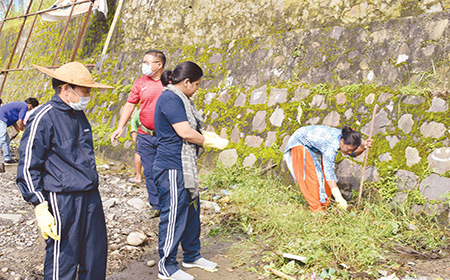 LONGDING, Jul 20: The Longding district administration organized a cleanliness drive here on Saturday, in collaboration with the DUDA.
The drive saw the participation of government officers and staff, members of the Wancho Council, the WCS, the All Wancho Women’s Welfare Society, the LDSU, the WSU, the market committee, and others.
Addressing the participants, Deputy Commissioner Cheshta Yadav advised the people to be aware of Japanese encephalitis (JE), and
urged the business community not to import pigs and poultry from Assam until further order, as JE is transmitted through pigs and birds.
“Unless each and every individual realizes the importance of cleanliness, such time to time efforts made by the district administration, the DUDA, or NGOs and civil society groups for cleanliness will be of little use,” she said.
The DC informed that, besides the regular DUDA staff, the administration has engaged two contingency staffers primarily for collection of garbage from the market area.
She also directed the local vendors to vacate the central area of the town within two days and shift to the APMC market, in order to keep the town clean.
Longding ADC T Ekke also spoke.