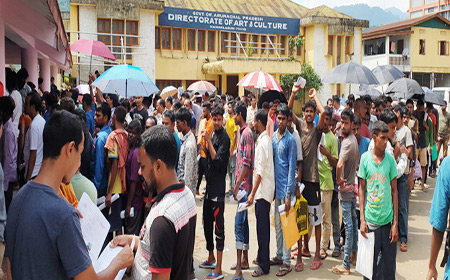 ITANAGAR, Jul 21: The second round of the ‘verification mela’ was held simultaneously at the DK Convention Centre in Itanagar, the Art & Culture office campus in Naharlagun, and the government secondary school in Nirjuli on Sunday to assist tenants residing in the capital complex in completing their verification process.
Itanagar SDPO Dekio Gumja informed that the public’s response has been “very positive so far,” and commended the effort and cooperation from every individual.
Reassuring that the document verification system is for the safety and security of everyone residing in the capital complex, he said “it is also important to know the statistics of the tenants and workers residing in the capital.”
He said forms are being received at the police stations, adding that “people who could not attend the mela can collect and submit verification forms at their nearest police station.”
Arunachal Chamber of Commerce & Industries (ACCI) president Tarh Nachung informed that over 70,000 forms have already been distributed, while more than 1000 forms were submitted along with documents during the first mela.
“We are expecting over 30,000 forms to be submitted back today,” he said.
He also commended the “positive response of the building owners who participated in the verification process.”
ACCI secretary-general Toko Tatung informed that the verification is “a pilot project, and the ACCI will tie up with the administrations of other districts soon.”
The ‘verification mela’ was launched by Home Minister Bamang Felix on 7 July to identify tenants and workers residing in the capital complex.
The verification process is mandatory for everyone who does not hold a permanent residency certificate of the capital complex but resides here, the officials informed.
The mela is being organized by the ACCI in collaboration with the capital police.