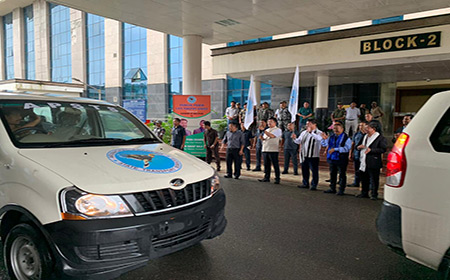 Staff Reporter
ITANAGAR, Jul 22: In a move to improve its services, the Arunachal Pradesh State Transport Service (APSTS) on Monday added 30 Mahindra Xylo taxis into service.
Chief Minister Pema Khandu along with Transport Minister Nakap Nalo flagged off the seven-seater Xylos, in the presence of Home Minister Bamang Felix and Transport Secretary Dani Salu, at the civil secretariat here.
The keys to the cars were handed over to the CM by Mahindra’s regional sales manager Ashes Mishra and area sales manager Niket Malik.
The 30 Xylos will be inducted into service for different routes across the state.
The CM informed that the state government has also placed fund for procuring new buses for the APSTS in order to further improve its services.
The APSTS had introduced Tata Sumo taxi service three years back, which greatly boosted the department’s revenue earning. The department has reportedly generated a total revenue of Rs 18.87 crore during 2018-19.
On the sideline of the flagging-off ceremony, APSTS General Manager Abu Tayeng informed that the fleet of Xylos has been added to the department’s services in view of the fierce competition from private operators.
“There are lots of areas which are not connectable by larger vehicles like buses; so the Xylos will be inducted for those areas, considering the feasibility of the roads, at a cheaper rate,” Tayeng said.
He informed that the state government has placed Rs 10 crore for procuring new buses this year. “We are also considering launching luxury services like Volvo buses and Innova on various routes,” the GM said.