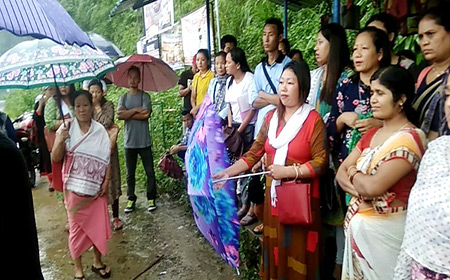 Staff Reporter
CHIMPU, Jul 22: Members of the Arunachal Pradesh Police Compassionate Aspirant Victims (APPCAV) gathered at the police headquarters (PHQ) here on Monday to express their angst over the postponement of their recruitment process yet again.
Speaking to reporters, an aspirant said that after they highlighted their grievances through the press on 3 July, the police department had published an advertisement calling all applicants under compassionate ground for personal appearance, from 22 to 31 July, before a committee.
“However, on 20 July, the department published another advertisement, postponing the personal appearance,” he said, and rued the “injustice” meted out to the aspirants.
“Considering the heavy rainfall and poor weather conditions, we left early from our districts and arrived in Itanagar on the date of the personal appearance, but the advertisement postponing the same was published on 20 July,” he said, adding: “Even if the date was going to be postponed, they should have intimated us earlier, instead of just two days prior to the recruitment date.
Many widows and mothers have also left everything and come to Itanagar for the same. If the police department does not take an initiative, we will sit on a hunger strike here (PHQ).”
A female aspirant also shared her agony. “I have nobody to rely on, and they keep calling us to come here from so far off time and again. They merely look at the documents and keep asking us to leave for now, telling us that we will be called back. This is what they’ve been doing for the past four years. They have no compassion for how we manage the money to reach here,” she said.
A widow of a policeman said, “We have been coming here for years and asking for the jobs that were once our husbands’. We deserve to get a chance at the jobs. We are struggling financially.”
While DIGP (Headquarters) Kime Kaming did not issue a statement to the press, the aspirants met him and were reportedly given assurance that the appearance for recruitment will be done within August.
The candidates were reportedly told that the postponement came about “due to the transfer of the DGP.”
“The DIGP assured us that he would speak to the newly appointed DGP to fast-track the recruitment process within August, as and when he takes charge,” the aspirants informed.
On whether the assurance was satisfactory, the aspirants said, “We have been given similar assurances on several occasions, and now we cannot help but be doubtful. However, we respect the words of an officer, and are leaving in hopes that he and the department will fulfill their assurances this time.”
On 14 November, 2015, the police department had advertised 241 posts, from that of head constables to washermen, on compassionate ground for those whose guardians had died in service.