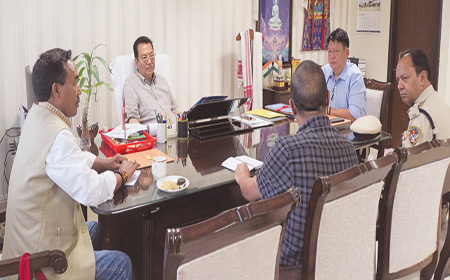 ITANAGAR, Jul 23: Deputy Chief Minister Chowna Mein has called for constructing the Miao-Vijaynagar road in Changlang district “on a war footing.”
The DCM said this on Tuesday while reviewing the status of the under-construction road during a meeting with RWD Minister Honchun Ngangam and RWD CE D Nyodu in his secretariat office here.
“Vijaynagar is one of the major border towns of the state which is strategically located near the Myanmar border, and the government is seriously concerned about road connectivity to the remote town,” Mein said.
He said the government is ready to provide an additional fund of Rs 39 crore for realignment and construction of culverts and bridges, as sought by the department. However, he said the department should use the fund judiciously and complete the road within the stipulated time.
Ngandam, who requested for the additional fund to complete the road project, informed that a new alignment has to be made “due to the uniqueness of soil conditions and a shortfall in sanctioned DPR” for the project.
Earlier, Nyodu briefed the DCM on the issues faced in the construction of the Miao-Vijaynagar road, such as harsh topography, repetitive cloud burst, frequent rainfall, forest regulations, gap funding, etc.
However, he informed that several steps have been taken to remove and resolve these issues. (DCMO)