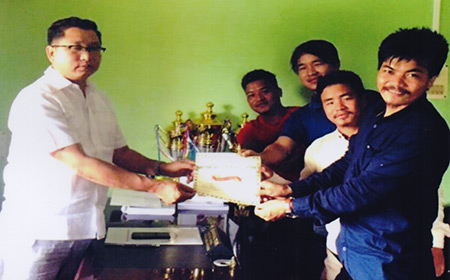 ITANAGAR, Jul 23: A delegation of the Pakke-Kessang District Olympic Association (PKDOA), led by its secretary-general Tate Tayam, on Monday called on Arunachal Olympic Association (AOA) secretary-general Abraham K Techi at his office chamber here and discussed various ways to promote games and sports in the newly-created district.
The association’s members apprised Techi of the need to provide support and assistance for the growth of games and sports in the district. Stating that the district is endowed with plenty of sporting talents and has the potential to do well in the national and international arenas, the PKDOA members said “the need of the hour is to organise boxing tournaments in the district to encourage its youths.”
Techi commended the PKDOA’s efforts to improve and promote games and sports in Pakke-Kessang, and assured to extend all possible help to conduct a boxing tournament in the district.