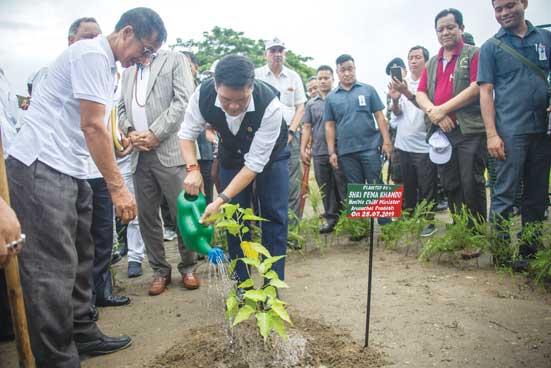 One lakh saplings to be planted within the next 24 hours

JOLLANG, Jul 25: Chief Minister Pema Khandu on Thursday launched a statewide plantation programme themed ‘Clean-Green Arunachal 2019’ with the aim of planting one lakh saplings within the next 24 hours.
Speaking during the launch function at the Art of Living campus here, Khandu said the drive is being carried out by the forest department.
“The campaign, which is being held as part of the Van Mahotsav celebration, has also set a target of planting one crore saplings within the next five years,” he said.
Highlighting the richness of the state’s biodiversity, Khandu said the forest carbon stock in Arunachal comes to 148.52 tonnes per ha, which is highest in the country and whose value, in terms of carbon credit at 6 Euros per tonne, works out to Rs 48,000 crore annually.
The CM urged the forest department to “come up with a vision” to preserve the link between forests and the tribal societies, and to “enable the tribal people to reap economic benefits from the forests in a sustainable way.”
He also advocated “giving forethought to agendas which, in the name of protecting Mother Earth, only aim to block development vital for the wellbeing of the state.”
Saying such “misplaced agendas” were not in the interest of the state, Khandu urged “the young minds to analyze for themselves.”
Deputy Chief Minister Chowna Mein, who was also present at the function, said the plantation drive would “help create awareness about the value of the forests, besides protecting the environment and combating climate change.”
“The state is considered one of the 12 mega diversity hotspots in the world. There is a huge scope to develop forest tourism in the state, which in turn can help promote sustainable forestry management and support local communities,” he said.
UD Minister Kamlung Mosang also attended the programme.
In Lohit district, 7000 saplings of various species of trees were planted in Digaru on Thursday to mark the launch of the campaign.
DC Prince Dhawan, SP DW Thongon, government officials and members of NGOs took part in the plantation drive, which was organised by the forest division in association with the district administration.
In West Siang district, 4900 saplings were planted at various schools, the DC office complex and other locations, including the 28 Bn ITBP’s Himveer Bird Sanctuary, Basar, Liromoba and Yomcha towns.
DFO Abhinav Kumar highlighted the importance of tree plantation, and encouraged everyone to plant more trees.
In West Kameng district, the Shergaon forest division carried out plantation drives in Kalaktang, Rupa, Shergaon and Ramalingam.
In Ramalingam, the forest protection squad of the Eaglenest Wildlife Sanctuary and the Singchung Bugun Village Community Reserve planted 500 saplings along the Foothill-Chaku-Tenga road. The drive also saw the participation of members of the state wildlife board, and the Shergaon DFO.
In Lower Siang district, the Likabali forest division conducted a plantation drive as part of the campaign. A large number of people, including senior citizens, government officers and GBs, took part in the drive. Solar appliances were also distributed among the public to mark the occasion. (CMO, DCMO, DIPROs and other sources)