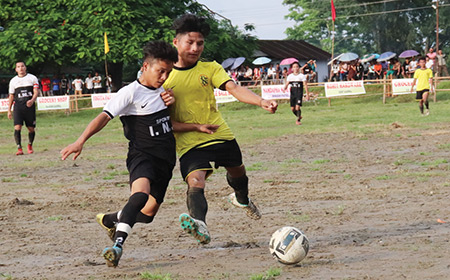 TAWANG, Jul 26: The Independence Day (I-Day) Cup football tournament was kicked off by 190 Mountain Brigade Commander, Brig Zubin Bhatnagar, at the Gyalwa Tsangyang Gyatso high altitude stadium here on Friday.
Brig Bhatnagar encouraged the youths in sports, saying “games and sports are very important for physical development as well as character building.”
“There are lots of talented footballers in Arunachal, and I hope we will see international level footballers from this state very soon,” he said.
He also remembered the soldiers who sacrificed their lives during THE Kargil war while defending the nation.
“Today is very important day for all of us to remember our brave soldiers who made the supreme sacrifice during the Kargil war. We soldiers are always blessed to receive so much love and respect from the people of Arunachal, which encourages us to serve more dedicatedly and sincerely,” he added.
Earlier, Tawang district Football Association (TDFA) chairman Namgey Tsering highlighted the aims of the tournament, which are to provide the players of the district a platform to show their talents and help talented footballers further hone their skills.
He also paid tributes to the martyrs of the Kargil war.
The opening match was played between Pingya XI and Dosti Club Jang.
Organized by the TDFA, the tournament is being participated in by 19 teams.
The tournament is sponsored by Chief Minister Pema Khandu and MLAs Jambey Tashi and Tsering Tashi.
38th Bn SSB Commandant Rajesh Thakur and Tawang DRDA Project Director Lobsang Tsetan attended the opening ceremony.
Our Miao corres-pondent adds: The I-Day Cup football tournament, sponsored by local MLA and minister Kamlung Mossang, began at the general ground in Miao in Changlang district on Friday.
Reigning champion Namphai-II (A) FC beat Wunpawng FC 1-0 in the nail-biting opening match.
Eighteen teams will fight for the coveted cup and a cash prize of Rs 1 lakh during the 20-day tournament.
The runner-up will be awarded Rs 75, 000 with a trophy. There will also be individual prizes for the highest scorer, the best goalkeeper, the player of the tournament, and the ‘best disciplined team’.
The final will be played on the eve of the 73rd Independence Day.
Diyun-Bordumsa MLA Shomlung Mossang, who kicked off the tournament, advised the teams to demonstrate sportsmen spirit and entertain the football lovers with their skills.
“Football is not only about winning or building good physique but it helps youths to stay aloof from antisocial elements,” he said.
Meanwhile, as part of the ‘Clean-Green Arunachal’ campaign, 1000 saplings of different species were planted in Miao town by the forest department, led by Range Forest Officer T Mali. (With DIPRO input)