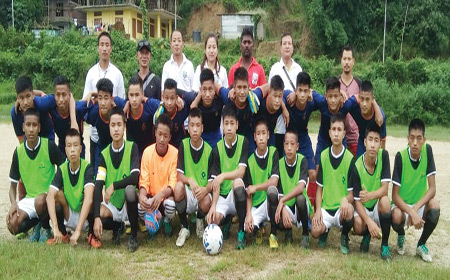 ITANAGAR, Jul 26: The government higher secondary schools of Yingkiong, Kamba and Bomdila won their respective matches played here on Friday and advanced to the quarter-finals (QF) of the state level Subroto Cup football tournament for U-17 boys.
GHSS Yingkiong (Upper Siang) were given a walkover against GHSS Boasimla (Kamle). The team from the Boasimla school was disqualified after seven out of its 14 players were found to be overage.
Jang GHSS (Tawang) was also disqualified after 10 players were found to be overage, and their opponent, GHSS Likabali (Lower Siang), was given a walkover.
Six matches, three each in the morning and afternoon sessions, were played at two venues here on Friday.
The first match was played between GSS Tissa (Longding) and GHSS Anini (Dibang Valley), and the match was won 3-0 by the school from Anini. The scorers were Abula Metu (2) and Wuyu Tayu.
GHSS Kamba (West Siang) advanced to the knockout round after beating GHSS Changliang (Lohit) 4-0. Tumto Nomuk scored a brace while Anang Gurung and Benzing Rai netted a goal each for their team.
The match played between GHSS Hayuliang (Anjaw) and GHSS Itanagar (Capital Complex) ended in a goalless draw.
GHSS Bomdila (West Kameng) beat GHSS Sangram (Kurung Kumey) 4-3 in penalties and became the third team to book a berth in the quarterfinals.
GHSS Jairampur (Changlang) drew 1-1 with GHSS Mahadevpur (Namsai).
The last match of the day was played between Dani Kunia GHSS, Ziro (Lower Subansiri) and GHSS Khonsa (Tirap), in which the former defeated the latter by a solitary goal.