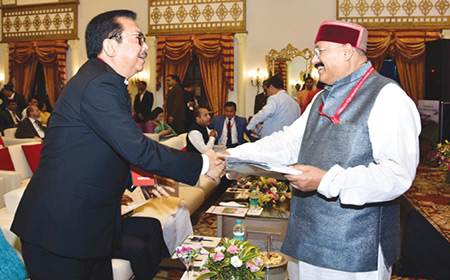 MUSSOORIE, Jul 28: The Himalayan states on Sunday came together at a conclave here in Uttarakhand to demand a separate union ministry to deal with problems endemic to them, and a green bonus in recognition of their contribution to environment conservation.
The conclave was inaugurated by union Finance Minister Nirmala Sitharaman. Chief ministers and representatives of Jammu & Kashmir, Uttarakahand, Himachal Pradesh, Sikkim, Arunachal Pradesh, Meghalaya, Nagaland, Tripura, Mizoram and Manipur took part in the conclave. The only absence was of Assam, which has been ravaged by the floods.
The twin demands formed part of a common agenda of the Himalayan states, and a proposal in this regard was handed over to Sitharaman at the end of the conclave, Uttarakhand Chief Minister Trivendra Singh Rawat told reporters after the event.
Explaining the rationale behind the demand for a green bonus, Rawat said most of the country’s rivers originate in the Himalayas, and therefore the states have to play the most significant role in the prime minister’s water conservation initiative. He said it is also necessary because the Himalayan states’ contribution to environmental conservation is the biggest with their green cover.
“The states are also at a disadvantage because large swathes of land fall in eco-sensitive zones where all sorts of development activities cannot be carried out,” Rawat said.
A green bonus, thus, is needed to compensate the Himalayan states for their disadvantages, he added.
Arunachal Pradesh Deputy Chief Minister Chowna Mein said the issues which are common to all the Himalayan states need timely intervention from the 15th Finance Commission (FC). He expressed hope that the FC would “look into the genuine concerns and make appropriate and specific recommendations for the Himalayan states to the government of India.”
Stating that one of the biggest challenges which the Indian Himalayan region faces is the annual devastation caused by relentless monsoons, Mein said, “The current norms of disaster relief under SDRF/NDRF guidelines are far too meagre to restore the damaged infrastructure.
“We are left with a mammoth task of restoring damages, which our state is unable to carry out due to its meagre resources,” he said.
On climate change, Mein said it would not only threaten the biodiversity but also affect the socioeconomic life of Arunachal’s indigenous people.
“The jhum/shifting cultivation in the state is a major concern. This aggravates the impact of climate change on water resources, and soil erosion due to massive loss of forest cover,” he said.
The DCM also advocated setting up the headquarters of the North East Water Management Authority (NEWMA) in Itanagar. He expressed hope that the prime minister’s initiative for creation of the NEWMA, which is in the process of being finalized by the NITI Aayog, “will go a long way in fulfilling the objective of optimization of water resources in the NE region.”
Mein said development of infrastructure, roads, power and telecommunication in Arunachal has not been able to keep pace with that in the rest of the country. To remove the critical gaps in physical and social infrastructural needs, the DCM suggested strengthening the economic condition of the people living in the remote border blocks, and arresting stress migration from the border areas towards the plains.
“The 15th FC should make specific recommendation especially for states with strategic importance vis-à-vis international borders,” Mein added.
Lamenting that “Arunachal is perhaps the only state in the NE which has been deprived of externally aided projects from the World Bank, the ADB and the JICA due to opposition from China,” Mein urged the FC to make suitable recommendations for making alternative arrangements with regard to externally aided projects.
The DCM also urged the FC to “take into account the factors concerning area, population, economic backwardness contingent on infrastructure deficit, inadequate financial inclusion of people at large, constraints in obtaining goods and services at economic rates, etc, while fixing the share of the state in central taxes.”
Chairman of the 15th FC, NK Singh, NITI Aayog Vice Chairman Rajiv Kumar, union Drinking Water & Sanitation Department Secretary Parameswaran Iyer, NDMA member Kamal Kishore, and Indian Institute of Forest Management professor Madhu Verma also attended the conclave. (PTI & DCMO)