Drug addiction has become a world wide problem and the leading cause of death. The range of both drugs and drug markets is expanding and diversifying as never before. Although the use of various psychoactive substances, such as alcohol, cannabis and opioids, has been observed in India for centuries, the current dimensions of the extent and the pattern of psychoactive substance use, and the problems associated with their use, are not well documented.
To address to this problem, the union social justice & empowerment ministry commissioned a national survey on the extent and pattern of substance use in India in 2018. The National Drug Dependence Treatment Centre of the All India Institute of Medical Sciences (AIIMS), New Delhi, was entrusted with the responsibility to lead the technical and scientific aspects of the national survey, which was conducted in all the 36 states and union territories (UT) of the country, in collaboration with 10 other medical institutes and a network of 15 NGOs.
The national level survey conducted on drug use in India indicated that the prevalence of drug abuse among males in the general population is significant. Drug abuse among women exists. Despite the fact that more men use drugs than women, the impact of drug use tends to be greater on women because women lack access to care for drug dependence.
Economic burden, disturbed family environment, violence and psychological problems are other consequence of drug abuse in the family. Adolescent drug abuse is another major area of concern because more than half of the persons with substance use disorders are introduced to drugs before the age of 15 years.
Drugs are chemical (psychoactive) substances that affect physical, mental, emotional or behavioral states of an individual. Drug abuse – a form of substance use disorder – is a patterned use of a drug, in which the user consumes the substance (drugs) in amounts or with methods which are harmful.
Drug addiction is a chronic, relapsing brain disease that is characterized by compulsive drug-seeking and use, despite the harmful consequences. Drug addiction is associated with impairment of various aspects of physical, psychological and socio-occupational functioning. The use of the term ‘addiction’ has now been dropped from scientific literature because of the derogatory connotation, and instead the use of ‘substance use disorder’ is preferred.
The estimates for eight categories of psychoactive substances – alcohol, cannabis, opioids, cocaine, amphetamine type stimulants, sedatives, inhalation and hallucinogens – as per the national survey on the extent and pattern for substance use in Arunachal Pradesh, in comparison to the national average and other high-prevalent states/UTs, is shown in the table below. 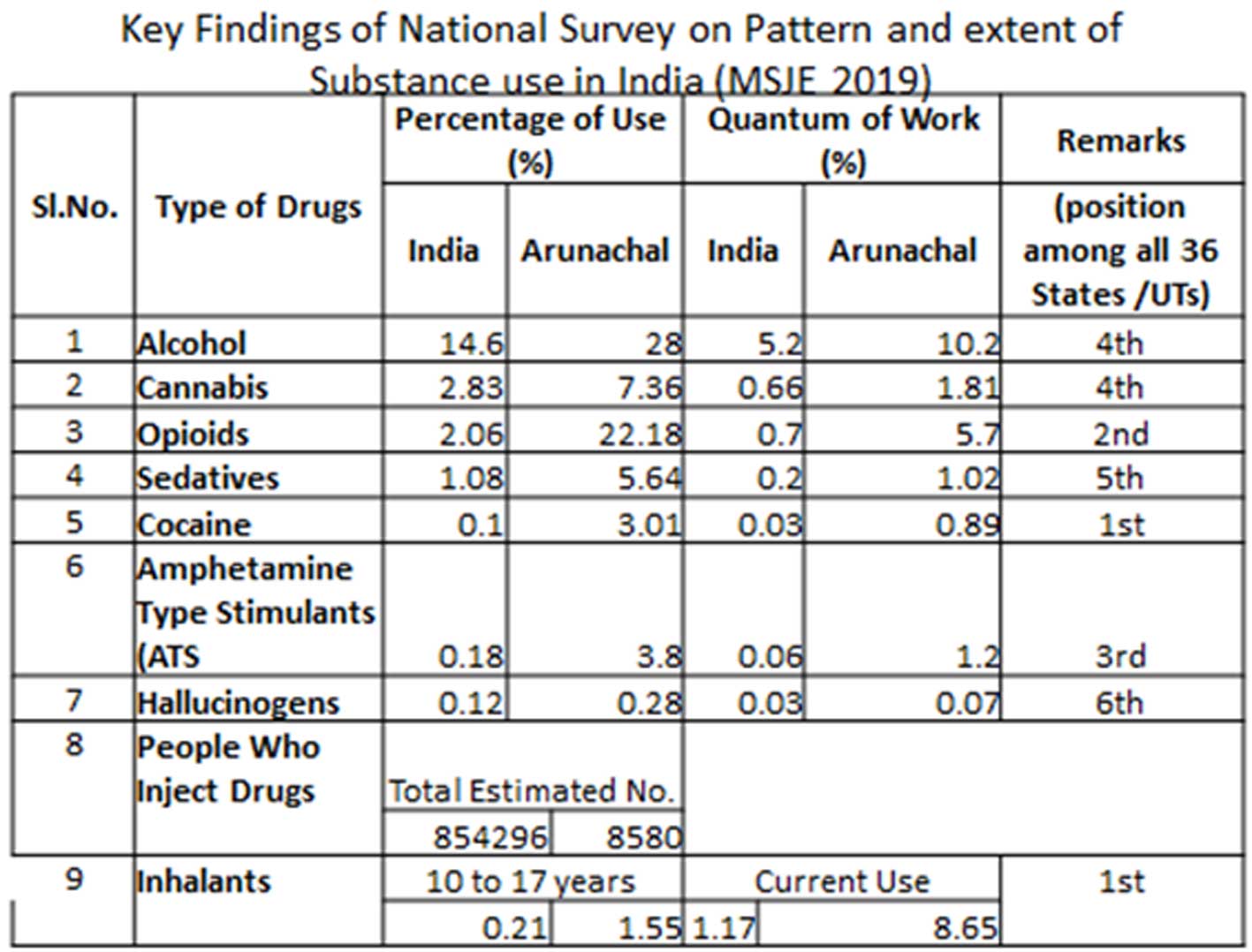 From the table, it is evident that substance use disorders have become rampant in Arunachal. Indeed, they are said to have assumed epidemic proportions and are definitely seen as a major public health concern. Tremendous burden can be expected on the individual, family and the society at large because of the problem of substance abuse in terms of physical and mental health, impairment of quality of life, economic hardship, lost productivity, accident, crimes, etc.

The way forward
There is a saying, “Every cloud has a silver lining.” The government of Arunachal in its state cabinet approved the flagship scheme, Mukhya Mantri Nasha Mukti Yojana, during 2018-19 for establishment and functionalization of drug de-addiction centres in Longding, Khonsa, Bordumsa, Lathau, Hayuliang, Tezu, Pasighat and Yupia to cater to the needs of people with substance use disorders. These centres will provide de-addiction and rehabilitation services very soon, with outdoor and indoor facilities.
Management of drug addiction includes treatment as well as prevention. Scientific evidence indicates that the development of drug use disorders and dependence is a result of a complex multi-factorial interaction between repeated exposure to drugs and biological and environmental factors. These drug-de-addiction centres will incorporate many components – pharmacotherapy, behavioural therapy and social support – each directed towards a particular aspect of the disorder and matching an individual’s particular problems and needs. (The writer is State Nodal Officer, Drug De-addiction Cell, Directorate of Health Services, Naharlagun. He may be contacted at dr.rikenrina@gmail.com.)