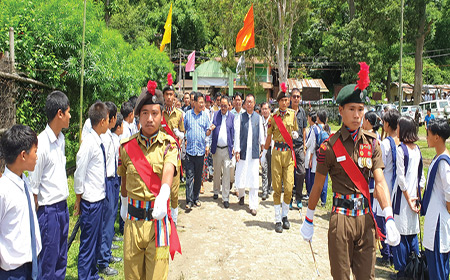 YAZALI, Aug 2: The Nyishi Elite Society (NES) on Friday launched its school adoption programme at the government higher secondary school (GHSS) here in Lower Subansiri district.
Among others, Education Minister Taba Tedir, Raga MLA Tarin Dakpe, Lower Subansiri DC Chukhu Takar, NES president Bengia Tolum, Yachuli ADC JT Obi, Kimin ADC Likha Tejji, executive members of the NES, the ANSU and the ANYA, teachers and students were present at the launch.
The NES has decided to adopt one school in each of the Nyishi inhabited districts, in view of the poor performance of the students in the CBSE examinations and the high rate of school dropouts in the last few years. The adopted schools will serve as model schools.
Tedir in his address called for better relationship between teachers and parents in order to provide quality education to the students.
“Teachers should apprise the parents of the behaviour and performance of the students, so that they can guide their children in better ways,” said Tedir.
He emphasized on creating a “friendly teaching-learning environment” in which the students can approach the teachers to clear their doubts and confusion without hesitation.
“The school campuses should be tobacco-free zones, and strict direction should be issued by the school authorities against any kind of drug and tobacco abuse,” the minister said, and asked the teachers not to allow the use of mobile phones in the classrooms.
Tedir informed that there are 3793 schools in the state, out of which around 500 are not functioning properly “due to zero enrollment.”
He also assured that he would have boundary walls and an auditorium for the GHSS here constructed soon.
The minister requested the DC to “take up the school on priority and provide scheme from untied fund,” and instructed the DDSE to “support the adopted school on priority.”
Dakpe also spoke on the importance of quality education and maintaining discipline in schools.
NES president Bengia Tolum informed that the NES will adopt seven schools this year, one each in the Nyishi inhabited districts. He said the NES would adopt either secondary schools or higher secondary schools and constitute a committee to work on providing better education to the students.
“The NES and the committee will inspect the adopted schools and identify issues like status of subject teachers, water supply, electrification, infrastructure, etc, that need immediate attention,” Tolum said.
The NES will monitor the adopted schools and coordinate with the school authorities to improve the academic performance of the students. It will also encourage formation of alumni associations to support in overall development and growth of the schools.
Earlier Tedir inspected the girls’ and the defunct boys’ hostels and the boundary around the school’s campus, and directed the authority to maintain cleanliness in the campus.