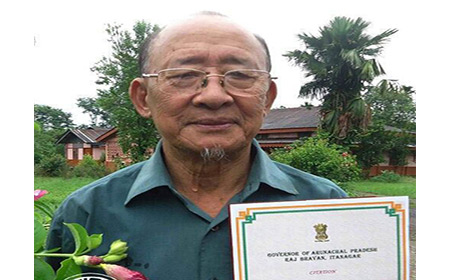 [ Prafulla Kaman ]
RUKSIN, Aug 3: Tea cultivation, which is widely considered a money spinner in landlocked Arunachal Pradesh and its areas bordering Assam, has apparently found its mooring in the Siang valley.
Since the region is bereft of any industry, the commercial horticulturists of the region have now set their eyes on tea-based industry. Depending on feasibility, some of the tea growers are growing small tea gardens and producing green tea for economic benefit.
Thus, after the commercial success of the green tea produced by the Donyi Polo Tea Estate of the Siang Tea Industries in Oyan, in East Siang district, another tea planter has started the same business of producing and marketing green tea for the local markets.
The Yonggam Tea Estate, owned by former tea planter Nyodek Yonggam, has set up a green tea production unit in Oyan, near the Assam-Arunachal boundary.
Yonggam, who is the proprietor-cum-manager of the estate, has been running the green tea unit for the last few months and sells packaged green tea at a cheap price.
Yonggam is a former Rajya Sabha member and a retired chief commissioner of the state information commission (RTI). He had earlier served with the erstwhile Doom Dooma Tea Company Ltd, where he gained practical knowledge of scientific tea cultivation, and is now playing an active role in extending tea cultivation in the Siang basin.
Leading the Small Tea Growers Association of Siang Basin as its chairman, he initiated extending tea cultivation in the wasteland of the Siang basin, covering a large part of the boundary areas near Assam.
Octogenarian Yonggam, who is a native of Oyan village, has already developed a tea garden in a 10 hectare plot in his residential complex, which yields over 60,000 kgs of green tea leaves in a year. He has also published a booklet highlighting the benefits of organic green tea consumption on human health.
Notably, former Arunachal governor JP Rajkhowa had awarded a citation certificate to Yonggam in recognition of his distinguished public service and exemplary commitment in the field of tea plantation in the state.