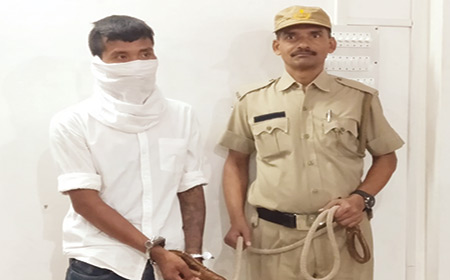 Staff Reporter
CHIMPU, Aug 3: A special investigation team (SIT) of the Arunachal Pradesh Police arrested a suspected underground (UG) operative, Wangchin Wangpan, from Lekhi village near Nirjuli, on Friday for planning to execute abduction, extortion and murder in Naharlagun.
SP (SIT) Navdeep S Brar, however, did not reveal the details of the person(s) who had received threats (from Wangpan), “in the interest of the safety of the complainant(s) themselves.” He said there had been apprehension that the suspect would have executed his plans within the next few days or weeks.
Addressing reporters at the police headquarters here on Saturday, Brar informed that the police had “received reliable input that the UG group, National Socialist Council of Nagaland (Unification), was planning to execute abduction, extortion and murder in Naharlagun.”
Keeping in view the sensitivity of the matter, the SIT team, comprising Inspectors N Lali, K Tao and A Tayeng, led by the SP, raided various locations in Naharlagun and Nirjuli.
During the raid, Wangpan, who is also suspected to be a close aide of the self-styled chairman of the NSCN (U)’s Arunachal unit, Loliam Latey, was apprehended.
Before being apprehended in Lekhi, Wangpan had changed locations several times.
During their search, the police recovered a hand grenade, 13 live ammunitions of various calibres, a mobile handset, a voter ID card, and a Dimapur bound bus ticket from Wangpan’s possession.
It emerged during investigation that Wangpan had earlier been arrested for a kidnapping case by the Khonsa (Tirap) police under Section 363 IPC r/w Section 11 (ii)/17/18 of the Protection of Children against Sexual Offences Act.
He had also been jailed for three years for an extortion case under the Deomali police station in 2015. The police said Wangpan could very well have had close aides in the capital who provided him with logistic support.
“Latey and Wangpan had reportedly met in jail and planned on carrying out such illegal activities,” the SP informed, adding that Wangpan had been released from jail in January this year.
“Wangpan’s connection to the NSCN (U) in the former cases is under investigation,” the SP said.
Additionally, Brar informed that the SIT has made headway in several other cases under it. However, he said details could not be shared in the public domain, considering the sensitivity of the cases.