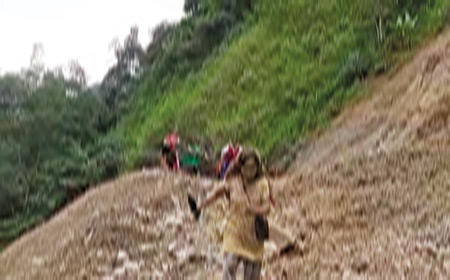 BARIRIJO, Jul 4: Several villages in Baririjo circle of Upper Subansiri district are cut off from the rest of the state for the past one month due to the lone road connecting Baririjo circle to the main BRTF road having been completely damaged by heavy mudslides.
The villagers informed that the matter has been reported to the department concerned but action is yet to be initiated.
According to reports, provision of all civic and modern amenities has been completely disrupted. Villagers, especially patients, are unable to receive proper medical treatment, while commodities such as vegetables, rice, LPG cylinders, etc, are unable to be transported to the villages from the main town.
Students are also facing problems in attending classes due to the unavailability of daily items. The villagers, including women and children, are risking their lives trying to cross the blocked area on foot.
When local MLA Rode Bui was contacted, he informed that he had asked the department concerned to clear the road. However, he said, “the villagers had volunteered to clear the road themselves, and the department was withdrawn from the work site on the basis of the assurance given by the villagers to clear the road.”
Bui said he has already submitted his report on the problem to the state government and has sought financial assistance for the road’s renovation.
Meanwhile, the villagers informed that private contractors and other villagers tried to clear the road thrice “but repeated landslides continue to damage the road, and it is not yet clear for passage.”
They requested the state government to have the road renovated at the earliest.